Ambassador Paschall sworn in as US ambassador to The Gambia 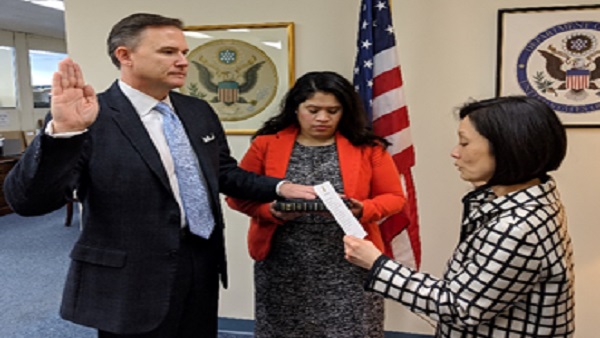 The United States Embassy Banjul has announced that the new United States ambassador to The Gambia, Richard Carlton “Carl” Paschall III was sworn in on 15 January at the US Department of State by Director of Presidential Appointments Jen Wicks.
Ambassador Paschall was nominated by President Donald J Trump to be Ambassador Extraordinary and Plenipotentiary of the United States of America to the Republic of The Gambia on 16 August 2018 and was confirmed by the Senate on 2 January 2019.

Ambassador Paschall, a career member of the Senior Foreign Service, class of minister-counselor, has served with the Foreign Service since 1991. He most recently served as the Deputy Coordinator for Military Coordination and Operations in the Bureau of Counterterrorism at the State Department. Previously, he served in leadership positions in the Bureau of African Affairs at the State Department, at the US Embassies in Iraq and Chad, and as foreign policy advisor to the Commander of the Special Operations Command – Africa.

Mr Paschall earned a BA from University of North Carolina-Chapel Hill and a MSc from the National Defense University. He is the recipient of numerous notable State Department awards as well as the Chairman of the Joint Chiefs of Staff Meritorious Civilian Service Award.
The US Embassy in Banjul said a ceremonial swearing-in ceremony will be held at a future date.
The US Mission in The Gambia said it looks forward to welcoming Ambassador and Mrs Jane Ellen Paschall to Banjul in the near future.