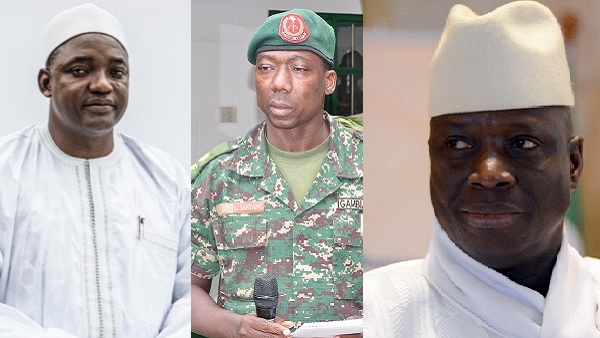 The spokesperson of the Gambia Armed Forces, Major Lamin K. Sanyang has said that the army’s decision not to intervene in the 2016 political impasse was necessary to avoid plunging the country into anarchy.
“We refused to intervene because we considered the whole thing as a political problem that can be solved through negotiations and that any attempt to fight Jammeh would have been chaotic,” he told West Coast Radio’s popular Coffee- Time with Peter Gomez.
GAF was blamed in some quarters for not intervening during the political impasse to force Jammeh out after he refused to step down following his loss in the election.

But according to PRO Sanyang, any attempt by the army to use force would be a recipe for disaster. “Just imagine despite the fact that no single shot was fired Gambians were fleeing the country in their thousands; how about if we fired bullets? We knew it was not going to pan out well for the country because Gambia cannot contain war even for one hour, talkless a month,” Sanynag said.

He said for those reasons the army refused to be dragged into a situation where it would be tempted to fire a single bullet. “Some of our colleagues were arrested just to provoke us to retaliate, but we kept our heads down so that history will judge us fairly, on the positive side. Probably those who are criticizing us did not know what was going on but we were on the ground and we knew the activities that were going on,” he stressed.

Major Sanyang said the army knew it would have been risky to do what many were asking them to do. “We would have had the Ivory Coast situation where the army split over a political matter resulting to a civil war. Despite our diversity in tribes and religion we considered a one fundamental fact that Gambia is supreme and that tribe or religion was not going to divide us. Our experience and training in peacekeeping missions have taught us how things can turn to be a disaster just like the Ivory Coast case. This is why we decided to give the politicians the time to sort themselves out. So for us we looked at the supreme interest of the Gambian people,” he added.

Frustration claims
Major Sanyang further disclosed that it was not true to suggest that the army is frustrated.
“The job of the military is noble and must never be politicized. We are highly motivated and President Barrow has a high regard for the Gambia Armed Forces through giving it his attention. Things are improving since the coming of the new administration,” he said.

TRRC
Major Sanyang said the TRRC will help the army to learn not to repeat the mistakes that were made in the past, adding, “Soldiers are not trained to be political leaders but to lead men to war. So if a military man takes the role of a politician he/she will take the country as a barracks by giving commands here and there. We are following the TRRC and we will have a lot to learn. People should not think that GAF is feeling otherwise about the TRRC.”
“We then have issues with rights violations like the case of the Junglers but we are working towards rebranding our image and surely when we are done GAF would never be the force that Gambians will see and fear,” he concluded.