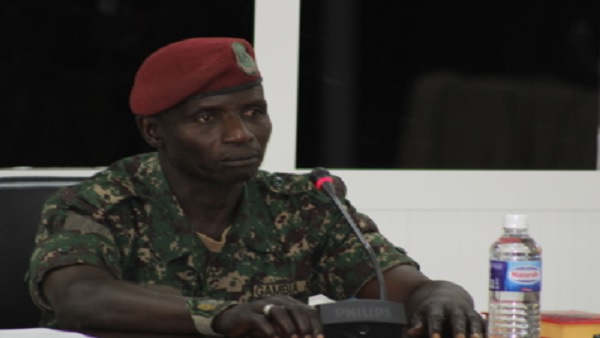 Warrant Officer Lamin Colley, a medic of the Gambia army yesterday told the Truth, Reconciliation and Reparations Commission that his gun accidently discharged on the late GNA soldier Fafa Nyang, as he tried to help the already badly wounded soldier.
“My intention at that time was to save his life but unfortunately as I was trying to help him, my gun accidently triggered and landed on him resulting in his death. I regretted it and it was so disturbing to me personally because I knew Fafa as a good colleague and an innocent man,” Colley said.

He said since that day, he did not see the bodies of Sgt Nyang or the other soldiers and officers who were executed in the forest by the junta and buried in a mass grave at the Yundum barracks.
Mr Colley claimed as he was trying to help Sgt Nyang, Sana Sabally whom he described as “a wild bush fire” asked him to get out from there.
He stated that a day before the tragic events, the council members held meetings with soldiers at the Yundum and Fajara barracks and it was then the council members told the soldiers that if any soldier misbehaved they will pay the highest price for countering the coup.

The witness however said he would not know how many soldiers and officers attended that meeting and would not know the outcome of the meeting.
According to him, shortly after the meeting Edward Singhatey fired shots in the air as a warning to soldiers.

He continued: “As I was in the clinic at the Fajara barracks, the council members arrived with cars and trucks and parked them around the anteroom. Shortly after their arrival I heard multiple shots in the air so I decided to go out to see what was going on in the camp. There I met Edward Singhatey and Sana Sabally. Edward said there were people who wanted to counter the coup but there will be a crackdown on those who are found wanting. The situation in the barracks at the time was tense and terrible. Edward Singhatey was so scared that he was like a wild bushfire.

At that time the armory and arms were not controlled so I picked up my rifle and went towards where shots were heard. There I saw Fafa Nyang crossing, it was a terrible moment as he walked towards the direction the council members were and later I heard a gunshot. I found Sgt Nyang lying so I rushed to see how I could help him but mistakenly touched the trigger which resulted in his death.”
Sittings continue today.