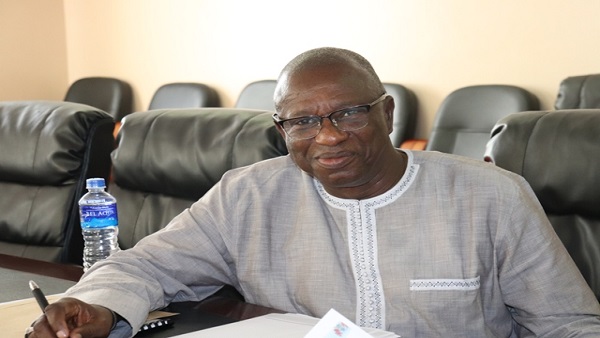 In order to gain first-hand information about the ongoing Banjul Rehabilitation project, which is expected to be completed within three years, Hon. Bai Lamin Jobe, Minister for Transport, Works and Infrastructure (MoTWI), on Saturday 25th July 2020, together with some senior staff of his Ministry and other relevant stakeholders, conducted a tour of the project site, starting from Bund Road to the various streets of Banjul, despite the rainfall.
Speaking shortly after the tour, Minister Jobe expressed optimism that the rehabilitation of the roads, drainage and sewage systems of Banjul is on track and, when completed, will usher into a new capital city for the country.

“The project is focusing on rehabilitating all the vital infrastructures of the city. Because it is the worst time of the year when it rains and Banjul is inundated, the construction works have slowed down a little bit. But we have gone around, looked at the project activities and so far, what we have seen is that the project is going on fine,” he added.
Minister Jobe further stated that the impact of the project is seen and felt in a positive way by the community of Banjul, even though the project is halfway into its three-year stipulated time frame for completion.

He finally called on all the stakeholders of the Banjul project to work hand in glove for the successful completion of the project on time, noting that the project is one of its kind for the city since Independence in 1965, about 55 years ago.

On his part, Abdou Jane, Project Manager, Gai Construction Company, contracted to implement the project, assured the Minister and team of delivering the project on time. He further told the team that almost 60 percent of pavement work on the total 14-kilometers of roads to be constructed in Banjul is completed. Mr. Jane further clarifies that once there is heavy rainfall, Banjul will experience a flashflood, but this will flow into the drainage network and finally pumped out into the sea.

On the issue of the Pump House on Bund Road, Jane said that it now has three pumps, compared to the two before. “We shall construct a canal around the Polder and this canal will be collecting the runoff from the drains in Banjul and channeling it into the Pump House. The Pump House will be renovated and new pumps installed, just like the sewage pumps installed at the Brikama garage and the one in Box Bar,” he said.

In a related development, the Minister for Transport, Works and Infrastructure (MoTWI) last Friday, the 24th July, 2020, visited Darsilami and Kerr Foday-Ba villages in the North Bank Region to see how far reconstruction of the road linking the two villages is ongoing following heavy down pour of rains which completely destroyed portion of the road, thus making it unmotorable.