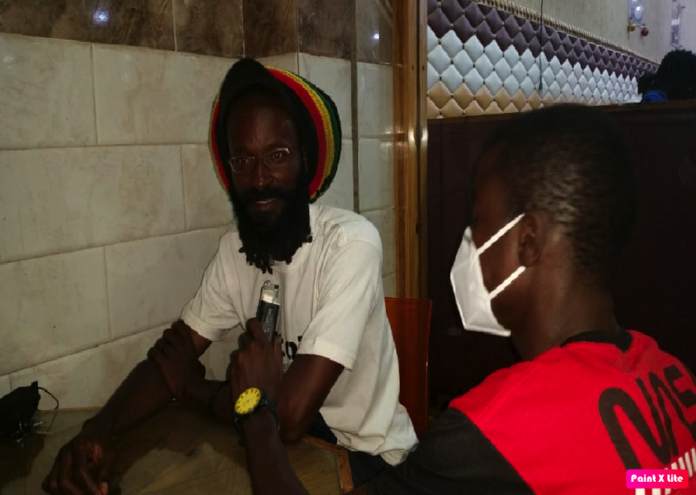 Alagie: Your announcement to enter politics and lead the country literally broke the glass ceiling as the country’s first dreadlocks politician, but not many Gambians know you, can you tell us about your origins?

I was born in 1977 at Westfield clinic and lived in Banjul. I went to Methodist nursery School, Marina School and then Gambia High in 94 for my O Levels, and in 1996 for A Levels. I eventually got a job at GTTI and was there for two years and the internet started in The Gambia. I got a part-time job at Quantum. Got another job at MRC in October of 2000. In 2002, I got a scholarship from the MRC to study internet engineering in the UK. I came back in 2005 and I am still at the MRC.

Your uncle Femi Peters was an influential UDP politician who fought for social and political justice, did you draw your inspiration from him?

He stood for what he believed in and for me, that is very important. I’m also standing for what I believe in even though the things I believe in are different from the things he believed. For instance, my appearance was shocking to most people who said to me if you are serious about the presidency you ought to cut your hair. But in the end, it’s the hair that brought me all this hype. So, it’s important to stand for what you believe in.

You are saying one needs to develop a thick skin and stand by his beliefs or principles in a society steeped in prejudice?

Not even thick skin. If you think that X is wrong or Y is right, hold on to that until they can prove it otherwise. Don’t just see that because ten people are going to Y, therefore you want to be with Y because it appears to be the winning thing.

Did it ever get to you, some of the negative things they say about you?

It doesn’t affect me. I am comfortable in myself. Whatever they say about me, doesn’t define who I am. They need to deal with that; not me.

You are a Rasta and Rastas are typically non-political, therefore, why did you decide to become political?

Again, I keep telling people it’s the frustration that me and generally the people I hang around, a lot of them are unsatisfied but they prefer to just sit there and complain about it and do nothing about it. Rastas believe in fighting for justice and things like that. But it appears to me that you can be there singing songs about justice and the politicians will continue doing what they are doing. So, at some point, we need to say okay, this is the system that’s in place, lets engage the system and try and change it from the inside instead of being outside and criticising the system in songs. That’s why I’m saying maybe we should step to the next level. But it’s not just Rastas; its young people – it’s the way we are brought up that politics is a dirty game but it’s never going to clean up if clean people don’t go into politics. I hope I am setting an example for others to follow and say ‘ah, even the Rasta man did it, maybe it’s not as bad as they say it is, maybe I can do it as well.’ Imagine if the things that we felt passionate about we were able to do something about, it would be a different ballgame. I am happy that at least these conversations are taking place.

Generally, your intention to legalise the weed has gone down well with a lot of Gambian youths many of whom voiced their support for your presidential ambitions, was that your target all along?

Not at all. If you can recall, in my press conference, I didn’t say anything about cannabis. I talked about five points: re-education, good jobs, national development, one term-presidency, and one billion in sports. It’s the reporters that brought it up maybe thinking they could… but I have an opinion, I think I believe in my opinion. And, like I said, one must stand for the things you believe in. This was my personal opinion and I think that given the economic benefits, given the perceived medical benefits, it doesn’t make sense for you to criminalise it and lock people up for just using it. The street value of one kilo of cannabis is between D4000 – D9000 in Gambia today. If you have good cannabis is D9000. If you have ordinary cannabis is D4000. One kilo, 4000. One ton, four million. One ton of groundnut D20,000, one ton of cannabis four million. What should we be growing? If its legal in other places and they would happily buy it from us, why are we still growing groundnuts? I am giving you Gambian prices, imagine international prices. That alone should make us pause and think again. We can’t use that money for good things, is that what they saying? Beyond that it’s medicinal benefits… so then, why did they criminalise it? But yes, I support the legalisation of cannabis.

One Facebook commentator said he would have supported your bid for State House had you not pushed for the weed, what do you have to say to that?

Do you take the weed?

Should there be a reason why? I just don’t.

Why did you say you will invest one billion in sports, instead of say agriculture?

I am saying instead of spending our money on traveling abroad or on four-wheel cars, fuel coupons and workshops that don’t take us anywhere, let’s put it in the people themselves, let’s see whether if we spend that money that way, we reap a better reward than the way we are currently spending the money and the amount of money we are spending. Last year’s budget was again, 100 and something million for sports. I am saying if most footballers are being paid nehal, maybe we should try and make a job out of it because it’s not all of us that are academic. Some of us are very good sportsman. I am just saying that they don’t see sports as something that can make money. Agriculture is practiced differently in different parts of the world. We have seen mechanise agriculture in Western countries. Feeding yourself is important. Do we still need to use nghoss nghoss [weeder]? Education is important because its education that brought people from nghoss nghoss to tractor. Everything centres around education. That’s why for me education is the building block of everything that we are trying to do. Agriculture is important but imagine if we had a more educated farmer.

Earlier on, you said some people prevailed on you to cut your dreadlocks if you are serious about the presidency, will you?

No. I don’t see how that has anything to be with president. If it has some bearing to being president, then yes but if it’s just you like to see clean-shaving people, then you’re still looking at the cover, the book doesn’t matter to you. I’m saying the book should start to matter to us. Let’s stop looking at covers. We have been looking at covers all this time and it’s gotten us nowhere.

Do you see the young people, especially those that embrace the Rasta way of life as your political base?

I want them to be my base. As it is now, they are not engaged in the political process. They’ve never identified with any politician. What they tell me is ‘ah these politicians, voting for them has no meaning’. And they are right. To a large extent, that’s what was happening. They didn’t see any anybody they could identify with within the political terrain. I am grateful that at least, I have inspired a lot of people who sent me messages and said look, ‘I was never interested in politics but this year I am going to vote.’ So even if you don’t vote for me, just register and vote. Don’t make the mistakes we made. I am 43 now before am thinking of politics.

Before politics, you are an up-and-coming entrepreneur who has already succeeded in initiating and marketing a tea brand in and outside The Gambia, how did you manage that?

I believe in myself and I believe in Gambian. I had a bit of money, I went online. When people are watching YouTube for entertainment, I am trying to learn something. And I saw tea machines and it looked simple. So, I gambled and ordered a manual tea machine and I tried it. This is after I had a conversation with friends after a young girl approached us selling nana. We bought the nana and that started the conversation on why don’t we drink our local teas. For the other people there, it was just a conversation. For me, it sparked something in my head. The next day, I bought Lipton which is stapled and I unstapled it and put Mborr Mborr there, stapled it, gave it to people and now they are asking me whether the staple is healthy even though when Lipton did it, they didn’t care whether it was healthy or not. So it seems to me we don’t believe in ourselves. For me, that is a journey to create a brand from scratch that people can identify with and say oh this is an African brand by an African.

Seriously, why should Gambians vote for you, an unknown in political terms instead of for example Halifa Sallah, Dr Ceesay or Ousainu Darboe…

[Cuts in] Who here has the proven pedigree? All those people have been here for years but they have never come to power so they haven’t demonstrated any pedigree. Nobody knows if they can do the job.

Bankole Yao, do you sincerely believe you can win the December polls?

Yes, I sincerely believe I can.

What are you going to do if you fail win?

We are going to work to make our movement stronger, so strong that the sitting government will have no other option but to work with us. We also intend to contest the local government elections and have as many reps in parliament as possible.

Thank you and good luck in the polls