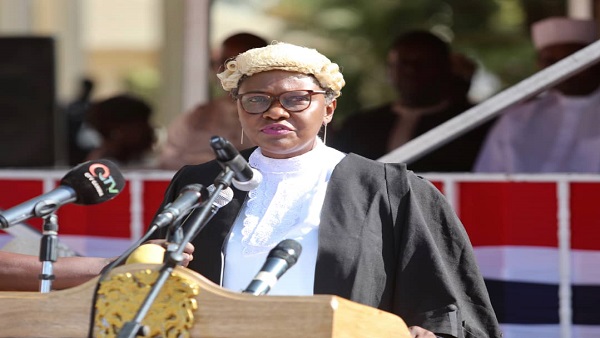 The President of The Gambia Bar Association, Rachael Y Mendy has spoken strongly about the atrocities committed under the past regime inside a building next to the ministry of justice.

Speaking at the recent 2019 Legal Year ceremony, Mendy asked: “Is it not an affront that an edifice that was built from the labour of our farming community was taken over and converted by the NIA into a torture chamber, flanked by our Ministry of Justice, and facing the Courts of Justice, whose very purpose is to defend the law and the rights of the individual enshrined in the constitution? Now that we all know the atrocities and evil that were perpetrated within that complex, we have a charge to take swift action to begin, at once, to restore the dignity of our nation, even before getting into the issues of reparation of victims and vetting of perpetrators some of whom are still within the service of the Government.

Even now while victims are testifying before the TRRC, substantial evidence in regard to the atrocities committed within the NIA is being obliterated while the government watches silently. Silence we all know means consent. In the name of justice, it is our resolve to ask his Excellency the President that, that very edifice of iniquity is handed over to the judiciary now, for the purpose of transforming it into a veritable place and home of justice in this land. This will be the foundation of building genuine and lasting peace by delivering services to all citizens and to signal the break with the abusive past.”
The Bar association president further expressed dissatisfaction about the establishment of a youth movement which she claimed is based on personal agenda.

She observed that the establishment of such youth movement can only result in the perpetuation of disunity among the youth whom she said should now be encouraged to work in harmony in credible social activities.
“This is a time for reconciliation and healing in the nation.”
It is in this context, she noted, that the Gambia Bar Association, as an institution, assumes its inalienable right of occasionally making public statements about current legal issues of public concern so as to promptly nip in the bud any likely corrosive effects on public trust in the judiciary or the legal profession.

She continued: “As an instrument within the judicial system, the Association will step up its contribution towards the country’s growth and development that will engender peace and national unity. It is for this reason that we are opposed to the action taken recently to resuscitate the establishment of a youth movement based on a personal agenda. Such action can only result in the perpetuation of disunity among the youth who should now be encouraged to work in harmony in credible social activities.”