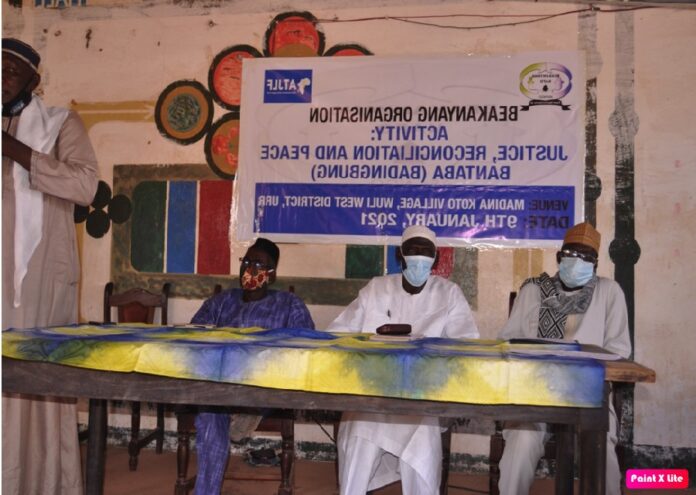 As part of its Badingbung (family house) initiative, Beakanyang over the weekend held a day-long peace, justice and reconciliation Bantaba at Madina Koto village in Wuli West District, URR.

It brought together over 100 participants mainly victims and survivors of human rights violations and their perpetrators.

In his welcome address, Mr. Nfamara Jawneh, Executive Director Beakanyang said such programmes could be emotional for victims but are needed to bring closure to them.

The BADINGBUNG (family house) of Beakanyang seeks to use traditional methods of truth seeking, justice and reconciliation.

According to him, the forum seeks to provide victims of human rights violations a community platform to share their stories and encourage perpetrators to accept the truth and seek for forgiveness from their victims.

“it’s our humble opinion that this programme will provide an opportunity for survivors and victims in Wuli who are yet to appear before the TRRC to also share their stories with the rest of the country,” he noted.

He added: “We have documented the stories of many victims and we realized that many people, including those of you here present, are survivors of gross human rights violations mostly meted on you by the former government,” lamented rights activist.

For his part, Alhagie Mbemba Jabby, the Chairman of Badingbung who is also the Alkalo of Taibatou, said such forums will promote truth telling, community healing and reconciliation while restoring broken relationships.

Speaking earlier, Hon. Seedia Jatta, National Assembly member for Wuli also appealed to victims to consider forgiving their perpetrators. He warned against retaliation which he believes is not the best option for reconciliation.

Lead facilitator Oustass Makeh Jagne of Bantunding village urged victims to forgive their perpetrators especially when they apologise to them.

He called for respect of human rights to promote social cohesion, peace and sustainable national development.