BIRI-BIRI, THE LENGEND DIES Tribute; the story of Biri-Biri as never been told 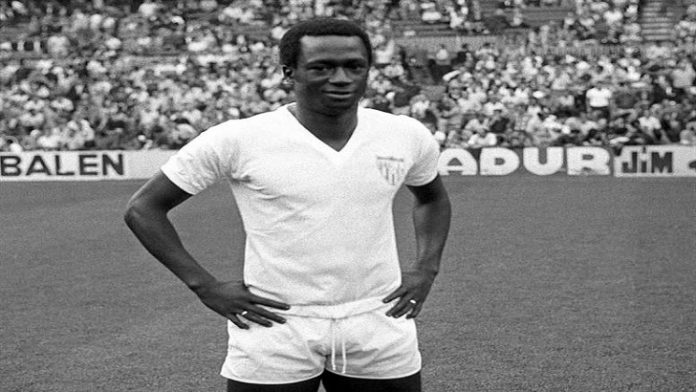 He attended school at the Albion Primary School and St Mary’s Primary School at Leman Street in Banjul before proceeding to Crab Island Secondary School where the might in the star was revealed. He became an instant sensation in the school’s football team for which he will become captain at the tender age of about fifteen years.

While in school, Biri was chased by many Association football teams but he would later choose the Black Stars football Club in 1963. Following a stint with the latter, he proceeded to Black Diamonds and immediately established himself as a superstar and teams continued to vie for his services. One veteran contacted for this piece had this to say: ‘Biri became an instant hit in the FA and top giants in the league at the time were all out to get this complete talent.” He later played for White Phantoms and then onto Augustinians under the watchful eye of the late Koto Louis Kajack Prom before finally moving on with some other players to establish what is today Wallidan Football Club in 1968/69.

In 1963, Biri became the youngest player to ever play for The Gambia in what today is still remembered as the last time The Gambia beat Senegal. Through the assistance of the late Alhaji Matarr Sarr Biri became one of the first Africans to test the professional terrain with Derby County of England.

He proceeded to Denmark where he played for B1901 and Herfolge before proceeding to Spain to suit up for European powerhouse Serville where to this day he is by far one of the most popular and much respected playe to take to the field. He led Serville to its only FA Cup appearance in the 70’s and he is still remembered for one of his brilliant gravity defying goals against Spanish national goalkeeper at the time, Arconada. His 26 goals during his four-year career with Serville still stands atop in the record books of their all time foreign legion of players. Up until this day a very popular stand in the Seville stadium is named after Biri. He retired from professional football in 1981 and returned to his ‘first love’ Wallidan where he continued to play until his retirement in 1986.

Biri played for The Gambia National team up till 1986, by far the most capped player in Gambian history if not Africa as a whole. Many a times, Biri had answered to national duty at his own expense and left every ounce of Gambian blood and sweat on the pitch.
There is no single team in the sub region that did not specifically map out strategies to defend Biri back in the day. Despite the hard tactics that were employed both locally and internationally, Alhaji Momodou Njie is and will be the greatest that ever wore the Red, White and Blue and there is or will never be a debate on that. One thing is certain, had accurate records been kept on his prolific career his goals could have numbered a thousand or closer to be precise.

Alhaji Momodou Njie is the double recipient of two National Awards of The Gambia in appreciation and recognition for his great services to The Gambia. His services to say the least are unmatched and will stay that way.

One of the greatest player to come to Seville great Diego Armando Maradona the Argentine called Biri “THE GREATEST” based on tapes he saw on arrival in Serville. Whe the tow met in 1994 Maradona told Biri that he will never be able to undo his feat at Serville and you bet, he never did. To this date the name Biri continues to ring in Serville with its fan club named “NORTE BIRI BIRI.” According to the official website of the team, the most loyal fans of the team (those who sit at the lower section of the north end of the stadium) call themselves Biris. They got the name from Alhaji Momodou Njie who was nicknamed Biri.

Known for his intensity and mercurial nature, Biri was so popular with the Serville fans that the city selected him for the name of a part of their stadium to the disappointment of many corporate sponsors.. While playing in Europe, Biri paved the way for a number of players, a couple of whom played with him while others starred for other teams. He opened the doors of his house on a daily basis to many people some of whom he did not even know.He would always say, “the world is about sharing.” Indeed he shared his little with everyone and just loved being around people. As the great Saul Njie once put it, “If you watch him, you think he defies gravity; Biri was The Gambia’s Soccer Ambassador and the greatest ever there will be.” Yes those of us who had the honour of watching him wreck defences and score the most of impossible goals can attest to the fact without any exaggeration, Biri will stay in a class of his own. Indeed the greatest, Gaindeh Njie.. Pele La Gambie.
Thank you for your services to our country. Truly you deserve more.

WHAT NEXT WITH GAMBIA’ COVID-19 FOOTBALL RELIEF FUNDS?

Stakeholders in Gambian football, namely clubs, affiliate associations and regional associations are still waiting for the Gambia Football Federation to inform them about the...
Read more
Sports

In a rather pleasant twist of fate, the former executive director of the National Youth Council Lamin Darboe has just won a prestigious UK...
Read more
Sports

It is increasingly clear that the corona virus pandemic has entered deeply into the fabric of our society. One only needs to follow the...
Read more
- Advertisment -