‘Both Muslims and Christians should reject secularism’ 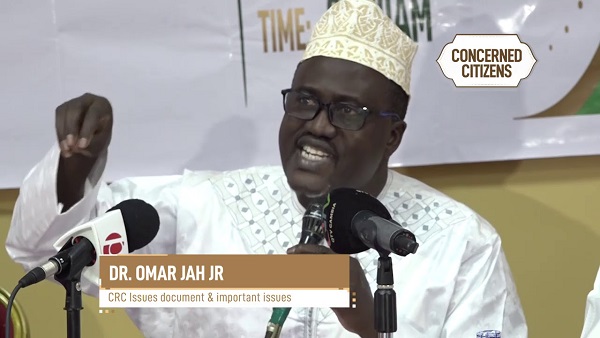 Dr Omar Jah, a renowned Islamic scholar, has said that Gambian Muslims and Christians must maturely discuss the issue of secularism because there are lot of misleading explanations.

Jah was speaking at a conference of Gambia’s renowned religious and traditional leaders, who yesterday converged at Qcity to discuss the issue of secularism in the country’s new constitution.

“It is fundamental that the country remain with the norms and values it is known for. We respect the co-existing of all people despite our religious differences but we believe Gambia should remain a human existing country. I say this because even animals are Gambians but they are not counted in the human category,” he said.

Jah also condemned calls for the removal of mosques in public places. “Gambian Muslims and Christians must maturely discuss the issue because those discussing the issue around religion are not making any sense.”

He continued: “Secularity, if looked at properly is anti-Islamic. If we are talking about democracy Gambia was colonised by Britain but in UK if you look at their cabinet manual, it says the Queen is the head of government and head of the Church and the defender of faith. That is okay for some of you who are democrats but for us democracy is second best. We believe in Allah and His Prophet.”

He said the mosques in public spaces are not built by the government but private individual and they did not prevent anyone building churches anywhere.
Sheikh Hamma Jaiteh, another outspoken scholar said secularism promotes homosexuality. He said people like the Pharaoh were secularists.

“Secularism is a disease, a time bomb and an idea of the unwise. When you ask about secularism in the dictionary, they tell you it is the separation of religion from the running of the affairs of the state. What a stupidity. That is Western teaching,” he noted. Jaiteh said there are powerful but hidden forces behind secularism and he had warned about this 20 years ago. ”Today it is rearing its ugly head and we must stand up against it,” he said.