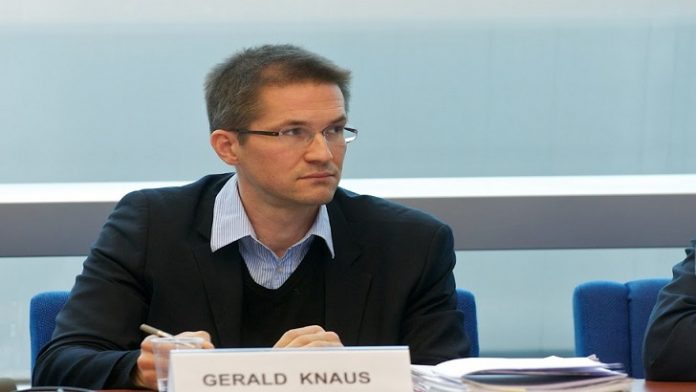 Gerald Knaus, the chairman of the European Stability Initiative, a self-declared think-tank advocating for policy changes on migration, has warned that the European Commission is likely to impose visa restrictions on The Gambia if the authorities continue to remain defiant on its ‘deportation moratorium.’

The Gambia government placed a moratorium on deportations of her citizens following mass demonstration against the return of over dozen migrants from Germany in February. Since then, there have been no deportations.

However, Mr. Knaus, a Berlin-based activist who is on a visit to The Gambia to engage policy makers on his organisation’s proposal called ‘Gambia plan win-win for Africa’, said the current moratorium is precarious and not good enough for the country.
“There needs to be solution. Europe does not know what to do with irregular migration without partnerships. It would take an honest debate for Gambia Government to confidently face the Germans and present a proposal that they would help them control future irregular migration in a legal way and be prepared to take back those who crossed irregularly,” Knaus added.

He said there are enough people in Germany who felt that deporting thousands of migrants is unrealistic but at the same time, the idea to have tens of thousands of people with no legal stay in Europe is bad for everyone.

“Now there are calls from the EU parliament for a resolution to impose sanctions on countries that refuse to take back their nationals who are not legally deemed to stay in Europe.

“If this resolution is imposed, the Gambia would be one country that will be affected,” he warned.
Mr. Knaus said he had meetings with the authorities of Württemberg, where majority of Gambian migrants reside and suggested that they should take into context interests of the origins of the migrants because deporting thousands of people will not be tolerated by the people.

“It is a threat to hundreds of thousands of relatives who live here and invested so much hope that no Government in the Gambia will be able to agree to that.
“If most Gambians will stay in Germany, Germany has no choice but to offer them legal stay except those convicted of serious crimes, which is a very small minority.

“In addition, in return for the Gambia Government discouraging future irregular arrivals, Germany should offer two things immediately: Priority assistance, so that Gambia will become one of the top priority countries for Germany development aid, and legal migration possibilities,” he said.