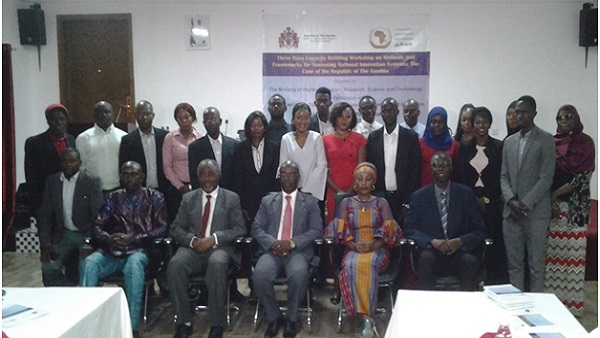 The Ministry of Higher Education, Research Science and Technology, Moherst, on Monday began a 3-day capacity building workshop on methods and frameworks for assessing national innovation systems in The Gambia.
They are in collaboration with the African Observatory for Science, Technology and Innovation (AOSTI) based in Malabo, Equatorial Guinea.
The objective is to strengthen the capacity of national research and innovation systems in Ecowas member countries.

The deputy permanent secretary of Moherst, Momodou Jange Jallow, said: “The Gambia in the development and evaluation of policies and instructions of Science, Technology and Innovation (STI), developed the skills of the main actors in the collection and management of STI statistical data, fill in all the indicators of the National Innovation Systems (NIS) evaluation framework and identify the strengths and weaknesses of The Gambia’s NIS.”
He said that “AOSTI has stated that measuring STI and its contributions to socio-economic development becomes crucial not only to enable governments and actors in National Innovation Systems but to better define national and regional STI policies in Africa.

“It will also provide new tools and data that could be used to monitor progress in the priority areas as identified in our national and regional policies which has been a challenge that countries have been encountering,” he stated.
The director of AOSTI, Philippe Mowoko, revealed that The Gambia is the sixth country – after Senegal, Mali, Niger, Guinea and Liberia – to run the programme in the Ecowas region.

He said in 2018, AOSTI successfully implemented a similar programme in the Economic Community of Central African States, Eccas, and part of the Southern African Development Community) (SADC) countries.
He said: “Profiling the nation innovation systems is a priority programme that you the African Union member states adopted in 2012, it was in May 2012 that member states agreed on the thematic areas that should underpin the AOSTI programme of work.
“The thematic of this workshop methods and frameworks for assessing the national innovation systems of the AU member states, was one of the adopted priority thematic areas,” he added.

According to the officials, STIs are nowadays important levers and mechanisms of productivity, competitiveness and sustainable economic growth.