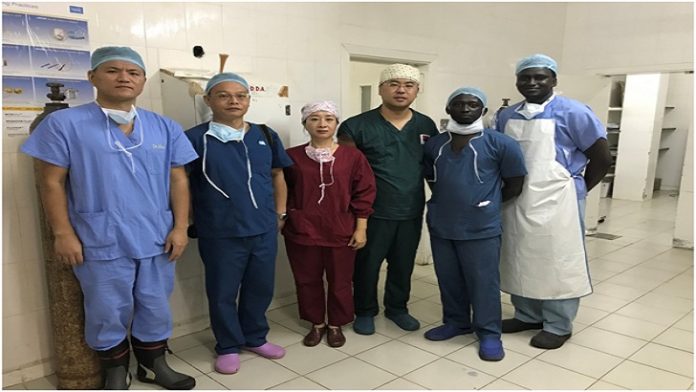 The first gynecological laparoscopic operation was successfully completed by the Second China Medical Team at the Edward Francis Small Teaching Hospital (ESFTH) last Thursday.
The whole surgical procedure went well and the patient had a fairly quick recovery. The surgery was conducted by the surgical team headed by Chinese gynecologist Dr Hou Rui, and composed of the members of China Medical Team and the doctors from the gynecological department of the EFSTH.
The high-end laparoscopic equipment used in the surgery was donated by the People’s Republic of China.

The successful completion of this operation marks the transition from laparotomy to the “keyhole” minimally invasive surgery in gynecology in The Gambia.
“The pelvic ultrasound and salpingography of the patient showed primary infertility due to bilateral fallopian tube obstruction, which left the patient impossible to conceive,” one of the surgeons explained.

Doctors said before this surgery, this kind of operations could only be done via laparotomy, which could lead to major trauma and poor outcome that were unacceptable to the patients. According to them, whereas, the laparoscopy is appropriate to this kind of diseases and well accepted by the patients and doctors worldwide, for it can not only detect the causes of fallopian abnormalities and but also conduct the treatment like adhesiolysis, salpingostomy and hydrotubation with less trauma and better outcome.

Laparoscopic surgery is also known as the “keyhole” surgery, meaning the cutting of several small holes 0.5cm to lcm in diameter in the abdominal wall for the procedure. With the laparoscope and the display on the screen, the surgical instruments were inserted into the abdominal cavity to perform the procedures instead of the hands of the surgeon.
As a new surgical technique, laparoscopy involves the insertion of the surgical instruments into the abdominal cavity through small incisions and the performance of examination, diagnosis and treatment for the abdominal cavity diseases via the television screen. The indicated diseases for laparoscopy also include uterine fibroids, endometriosis, ovarian tumors, fallopian abnormalities and malignant gynecological tumors.

“Compared with the conventional surgery, laparoscopy enjoys the advantages of small skin incisions, less bleeding, less pain, quick recovery, less scarring on the abdomen and so on. It ends the history of abdominal exploration only by way of opening the abdominal wall and has been accepted and applied by doctors all over the world.”
The bilateral counterpart assistance agreement between China and The Gambia is aiming to develop the cooperation in the fields of obstetrics and gynecology between Shengjing Hospital of China Medical University and Edward Francis Small Teaching Hospital.

With the donation of high-end medical equipment and training of Gambian gynecologists, a specialised obstetric and gynecology centre and a gynecologic endoscopic centre will be constructed in The Gambia to render high quality medical services for the Gambian people.
The successful completion of gynecologic laparoscopy in EFSTH opens a new chapter for the minimally invasive technique for diagnosing and treating gynecologic diseases in The Gambia.
Gynecologic laparoscopy is an alternative to open surgery. It uses a laparoscope to look inside your pelvic area. A laparoscope is a slender, lighted telescope. It allows your doctor to see inside your body.