CRC vows to respect will of Gambians 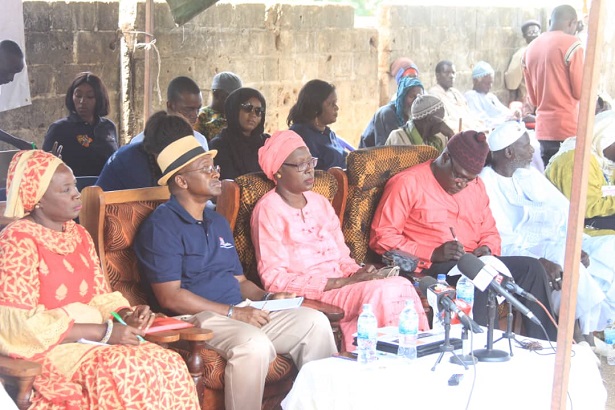 Members of the Constitutional Review Commission (CRC) have reassured Gambians that they will continue to do what is in their interest as they continue to confront the controversial non-inclusion of secularism and issues of citizenship in the draft.
Established by an Act of parliament in June, 2018, the CRC’s main functions are to review and analyze the current Constitution and draft a new Constitution.

The Commission has since published the first draft which they have shared with Gambians for consultation input, suggestions ahead of submission to the President, who will review it and send it to National Assembly ahead of the referendum.
The second phase of consultations has been dominated by the non-inclusion of secular and citizenship.

Cherno Sulayman Jallow, chairman of the Commission has stated times without number that there is nothing in the draft Constitution that is finalized.
In almost every meeting, Justice Jallow had encouraged Gambians to take their time and go through the entire draft so as to come up with informed recommendations ahead of the final drafting.

The second phase of the consultation was necessitated in order to attract the participation of Gambians in the draft as promised by the Commission during the first consultation phase.

“It is simply a draft published to seek public opinion of people, nothing in it is final yet. It will be very helpful if you can share your genuine opinions and thoughts in terms of what you think should be captured to help us finalize the draft constitution,” Justice Jallow said.
The CRC Chairperson re-echoed that however not every opinion can be captured in the draft constitution. He argued that some of the opinions could either be taken care of in some other laws or issues of enforcement whiless some maybe issues of policy development on the part of the government.

The Commission had also conducted consultation online with the Gambian diaspora on Friday. The Consultation gave Gambians abroad the opportunity to have their say on the draft.

The CRC’s diaspora consultation during the first phase was described by many as a mere excuse meant to exploit the country’s meager resources.
The Friday online Consultation was hailed by some sections of Gambians as a wise decision taken by the Commission to avoid spending huge amounts of money on an international tour.

But Chief Cham said: “It is unacceptable for someone to insult the head of state or people of high authority on the basis of freedom of expression and go unpunished.”
He argued that insulting elders especially leaders is against Gambia’s norms and values.
The Commission were also urged to entrench all the provisions in the Constitution that restrict the powers of the President.

Abdou Nyang said to avoid the repeatation of what happen under former President Jammeh, the draft constitution should clearly spell out the limitations of the powers of the President and entrench its clauses.

Kerewan
The meeting in Kerewan was also undoubtedly dominated by discussions surrounding citizenship and secularism. Farmers at the meeting also demanded for the Commission to include provisions for farmers to be represented at the National Assembly. The farmers argued that before the CRC provides fourteen places for women at the Assembly, they should rather provide representation for farmers given the importance attached to farming.
The Kerewan meeting was the first where a Pastor spoke on the controversial non-inclusion of secularism in the draft constitution.

Justice Jallow reminded the audience that Gambian Muslims should understand the concerns of their Christian brothers because Jammeh had once declared the country an Islamic State. He urged all those raising concerns about the non-inclusion of secular to avoid discussing the matter along religious lines.

Mustapha Njie recommended for a provision that will dictate for a leader to treat his/her people equally irrespective of faith, tribe, ethnolinguistic or language.
The CRC Chairperson like in all the other meetings expressed thanks and appreciation to the people of CRR for showing their interest in the consultations.

Shortly after the introduction of the legislature, the judiciary, local government and decentralisation in the draft by the Chairperson, Ms Cecilia Touray urged the CRC to include secularism in the Constitution in order to ensure ‘inclusiveness’.
She further argued that the Christian community is worried that what happened under Jammeh could happen again in the absence of secular in the New Constitution.
Kemo Janko, a teacher at the village Senior Secondary School suggested for a compulsory free tertiary education in the Constitution.

Whiles others were raising questions about the need to revise the provision on citizenship, Momodou Kaira suggested for the CRC to provide automatic citizenship by birth in The Gambia.

Responding to the issues made by the different speakers, CRC Chairperson Justice Jallow maintained that nothing in the draft is final. He urged Gambians to engage constructively in all matters to avoid unnecessary confrontation.

Basse
The discussions in the country’s second capital were led by Commissioner Yankuba Manjang focusing on the service commissions.
The youth rep at the CRC told the meeting that the draft has recommended for the formation of public service, teachers’ service and health service commissions.
He also highlighted the new provisions in national youth development and national council for civic education (NCCE).

The Chairperson of the Commission Justice Jallow also introduced the provisions on the executive, legislature and the Judiciary as contained in the draft whilest Commissioner Lamin S. Camara led a discussion on the republic and sovereignty of the people, the Constitution, laws and national values and principles.

Jangjangbureh
At the Janjanbureh meeting, Commissioner Lamin S. Camara led the discussion on Chapter1, 2 and 3 of the draft Constitution which deals with the Republic and Sovereignty of the people, the constitution, laws and national values and principles.
The chapters include the issues of citizenship, leadership and integrity, fundamental human rights and freedoms.

The discussions in the historical settlement were mainly cantered around citizenship. Many speakers expressed worries that the provisions for citizenship in the draft could be an attempt to sell the country to foreigners.
Although some people have raised concerns over the source of venues, the provincial meetings were well attended. 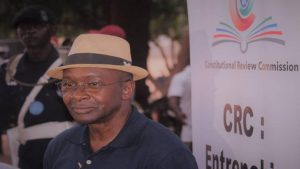 - Advertisement -
Share
Facebook
Twitter
Pinterest
WhatsApp
Previous articleOn the Draft Constitution; the glass is half full, half empty for media Part 2
Next articleOn the exclusion of “secular” in our Constitution: Open letter to the CRC and Gambians
Join The Conversation