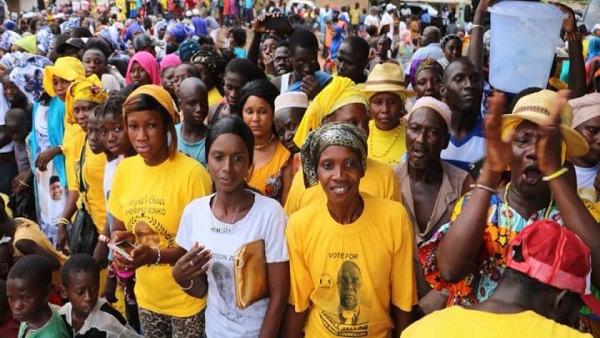 Jubilant crowds of UDP supporters filled the routes to the airport last night to welcome party leader Ousainu Darboe from the United States.
Mr Darboe, who flew to US to attend his party’s diaspora congress shortly after his sacking from government, gave a short appreciation speech on arrival from the roof of his car.
A veteran of the 22 years struggle against Jammeh, Darboe suddenly found himself back into opposition when is protégé President Adama Barrow broke ranks with him on political lines.

UDP supporters accused the president of betraying the party that catapulted him from an unknown individual to President while Mr Barrow indirectly fired back to say some people had to leave his bus for undermining his government’s agenda and pursuit of personal interest.

Mr Darboe told waiting reporters that his trip to US to attend the congress was planned even before he was removed from office and that his sacking gave him more opportunity and time to attend it. He said the UDP has still demonstrated its might looking at recent meetings in Soma, Gunjur and Bundung.