The visit of Sierra Leonean President 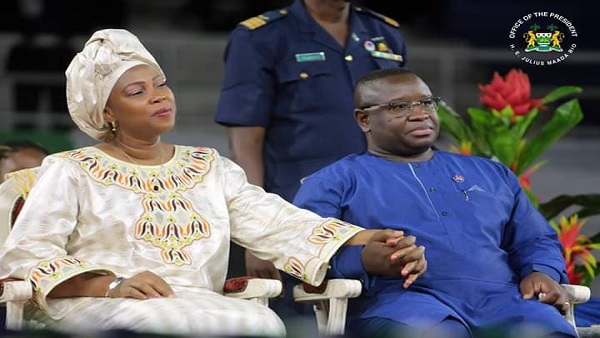 Sierra Leonean president, His Excellency Maada Bio and his wife Fatima Jabbie-Bio are in the country on a two-day working visit. He arrived earlier on Tuesday at the Banjul International Airport where he was met by his Gambian counterpart, His Excellency Mr Adama Barrow.

Later in the evening, a State Banquet was held in honour of the Sierra Leonean First Lady Madam Fatima Jabbie-Bio who is a Gambian citizen. The two leaders spoke warmly of the ties between the two nations. Sierra Leone and The Gambia have always enjoyed good relations and this visit will certainly further cement those ties.

The visit is a progressive move which will bring the two countries even closer in the spirit of integration which has great potentials for both nations. The visit will give the two governments and peoples the opportunity to explore more avenues to strengthen the relationship by sharing ideas on how to have more trade and exchange of expertise in other areas.

It is well-known that Sierra Leone supplies The Gambia with a lot of expertise in the areas of education, the judiciary and other vital areas of governance which go a long way in strengthening the democratic governance structures.

Both these countries being former British colonies, they have a lot in common and can certainly learn good practices on governance from each other for the benefit of their peoples. It is hoped that this will be one of many visits in order to take the collaboration to the next level.

If you have travelled to, or lived in Europe, Asia or the United States, you might be familiar with the phrase “mind the gap”....
Read more
Editor's Choice

On Covid-19 worldwide: on the march

“Most of the world sort of sat by and watched with almost a sense of detachment and bemusement,” said Helen Clark, appointed to investigate...
Read more
Editor's Choice

Hardly a month winds up without land clashes, at times macabre, hitting newspaper headlines or dominating TV screen spaces. Even when it appeared that...
Read more
- Advertisment -

July 14, 2020
The old adage states that business environment reform not only promotes the development of markets that encourage competition but enhances effectiveness and capability of...