DLEAG destroys over 2.9 tons of drugs 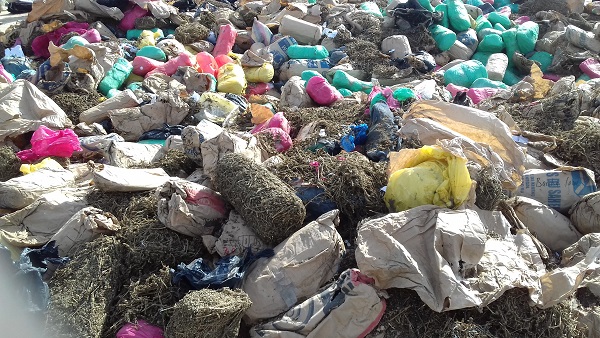 Over 2.9 tons of Cannabis sativa, cocaine, heroin and hashish were destroyed yesterday by the Drug Law Enforcement Agency after the cases were determined in the courts.
The destruction exercise which took place by the Old Cape Point Road was witnessed by senior government officials, the deputy speaker of National Assembly and other dignitaries.
Delivering his keynote address on the danger associated with the use of illicit drugs, the director general of the agency, Bakary Gassama, assured the agency’s readiness to up the ante in the fight against drugs abuse and trafficking.
He said the drugs malaise mainly affects the the youths.
He said drug trafficking is a national security threat and has inimical economic and political consequences.

According to the director general, 700 people have been arrested over the years and prosecuted.
Mr Gassama commended the staff of the agency and partners for their support in the anti-drugs fight and appealed for better training for his staff to enhance their capacity.
For his part, Gaye Sowe, the chairman of the DLEAG board, said the seizures demonstrate the commitment of the staff and he gave the assurances that the board will be committed to enhance the capacity of the staff.
Mr Sowe, a top human rights lawyer, said the agency is working on demand reduction as young people are becoming liabilities to their families by abandoning education to engage in petty drug businesses.

Gaye expressed his concern over the quantity of the drugs destroyed saying it is “a cause for [grave] concern to the state”.
After the burning of the drugs, personnel of the scientific unit of DLEAG, demonstrated to the crowd how they test drugs such as cocaine, heroin and Cannabis sativa.