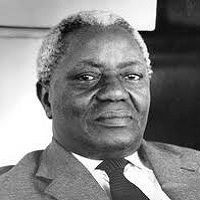 Gambian historian Baba Galleh Jallow has just published a collection of letters written by the Ghanaian lawyer and nationalist leader Dr. J. B. Danquah while intermittently under preventive detention between 1961 and 1965 when he died in prison. Jallow told The Standard that he collected the letters, written in the form of petitions to Kwame Nkrumah and his government, while conducting his doctoral research at the Ghana archives in Accra.
“The letters caught my attention at the Ghanaian archives in Accra because they showcase the greatness of a brilliant African mind that was unfortunately allowed to waste away in the confines of a prison cell meant for dangerous criminals, which Dr. J. B. Danquah was most certainly not,” said Jallow.

In his preface to the book, titled “The Prison Letters of Dr. J. B. Danquah”, Jallow writes that the Preventive Detention Act (PDA) under which Danquah was held “was enacted barely a year after Ghana attained independence in March 1957, and gave Prime Minister, later President Nkrumah the power to have anyone arrested and detained for up to five years, later increased to seven, upon suspicion of posing a threat “to the security of the state.” By the time of Nkrumah’s overthrow in 1966, an estimated 2000 prisoners were held under the PDA in Ghana.”

Jallow also writes in the preface: “Dr. J. B. Danquah was a lawyer, but above everything else, he was a great philosopher. His letters from prison are rendered in the voice of a cultured man of God who, because he sees so much beauty in the reality of Ghanaian life and society, feels so much pain in the absurdity of his extrajudicial incarceration, in the fickleness of the human mind under the influence of power and privilege. He extols the beauty of the Ghanaian spirit, and affirms again and again, the absolute centrality of man, of humanity, and of “man’s permanent motive forces and commitments” to God, to family, and “to the dignity of man as man”. To read Danquah’s letters is to undertake an odyssey into the depths of human nature through the mind of a great African philosopher whose traces it will be impossible to obliterate.”

In a review of the book Desmond Davis, former Editor of West Africa magazine and current Editor of Africa Briefing magazine writes that Danquah’s letters from prison, give us “an amazing insight to the political culture in Ghana just after independence. The letters are historical documents that must be read not only by Ghanaian politicians but also by everyone who has political ambitions in Africa.”
Jallow told The Standard that “The Prison Letters of Dr. J. B. Danquah” should be available at Timbooktoo bookstore sometime this weekend or next week.