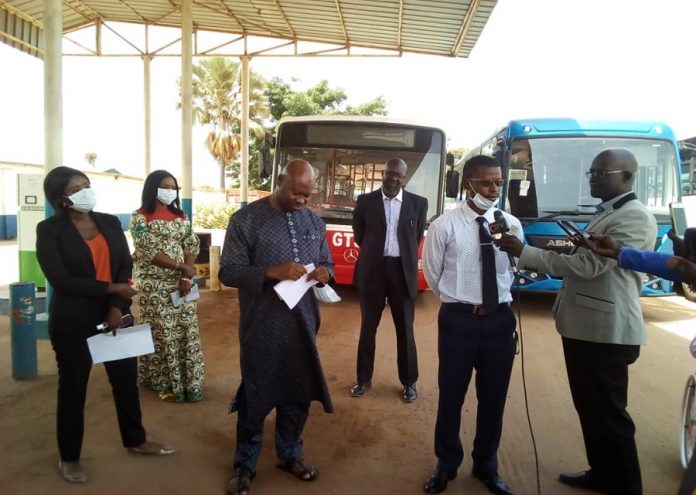 The Gambia Transport Service Company (GTSC) in partnership with government has introduced new buses in addition to its normal fleet to address pressure on commuters.
The buses would be deployed at crowded and urban areas as well as during peak hours with the intention of addressing transport problems for commuters, formal and informal workers, petty traders and the general public. The buses cater for all travelers including the physically challenged.

It could be recalled that government some time ago ordered drivers to carry half their capacity in a bid to curb the spread of coronavirus with some drivers deciding to park their vehicles.

Seedy Kanyi, General Manager Gambia Transport Service Company explained that the move to roll out the buses is in response to public demand.
He observed that Covid-19 has affected everybody worldwide.
Mr Kanyi highlighted that GTSC as a company has been responding proactively even before Government announced the state of public emergency by advising their staff to ensure their buses are not crowded, running at 50 percent capacity, bought and stationed buckets and sanitary materials at all their deports countrywide, partnered with The Gambia Red Cross Society to re-enforce their bus cleaning and daily fumigating them to curb the spread of the disease.

GM Kanyi observed that the demand for public transport has gone down since the outbreak of the disease with Government’s directive for all commercial vehicles to run at half capacity vastly affected transport operators’ revenue base.
According to him, GTSC currently generates about 30 percent of its daily projected revenue which is very low, saying they are really struggling.

However, Mr Kanyi added that they have responsibility to protect public interest as they are not all about making money as the company belongs to Gambian workers.
He clarified that their fares have not been increased even though the demand has gone down with them running at half capacity.

He remarked that reducing pump price by just one dalasi is not significant at all because cost of a barrel of oil has drastically gone down globally and nothing should stop Gambian authorities from further reducing the fuel prices to make up the revenue gap created by government’s directive to reduce passenger capacity by half.
He thanked government through the Ministry of Transport for their approval to use the buses.