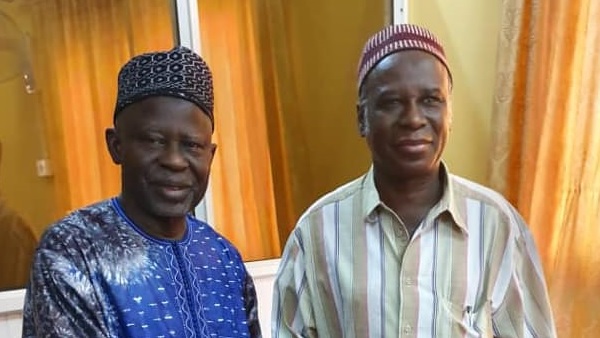 A onetime leader of the NCP and PDP Lamin Bolonding Bojang has joined the United Democratic Party.

Bojang, who was accompanied by a cross-section of some of the most influential citizens of Brikama, met the UDP leadership at the party’s office on Kairaba Avenue yesterday afternoon, said he joined the party in the interest of the development of the country. The 66-year old medical doctor said he did not join the UDP because he was seeking position.

The veteran politician, seen in some quarters as a maverick but a bridge builder, urged the party’s leadership not to discount the possibility of going into a coalition in the 2021 election, adding, “We should not be overconfident to say we will not go into a coalition. We should [be willing to] embrace other parties to join us for a coalition”.

Alhaji Kotu Bojang, a brother in-law of the UDP leader Ousainu Darboe, noted that “the UDP is the only party that can save The Gambia” from the slumber it has slumped into.
UDP National Assembly Member for Brikama South, Lamin Jariba Sanneh, said the party is in a good stead and is “very confident”to achieve its target of winning the next presidential election in the first round with a clear majority, but exhorted the members to remain vigilant and not be complacent.

Momodou Sabally, a key UDP surrogate, welcomed Mr Bojang to the party and assured him that he has joined the right political party.
“I am really hopeful that you will bring something to the party. You might underestimate yourself but your influence around the world is significant,” he added.

Party leader Ousainu Darboe welcomed Mr Bojang, saying all are equal in the UDP.
While Mr Darboe said he did not rule out the UDP going into a coalition in 2021when the need arises, he emphasised that “all genuine UDP supporters should think of how the party could win the next election with more than 52 per cent of the votes”.