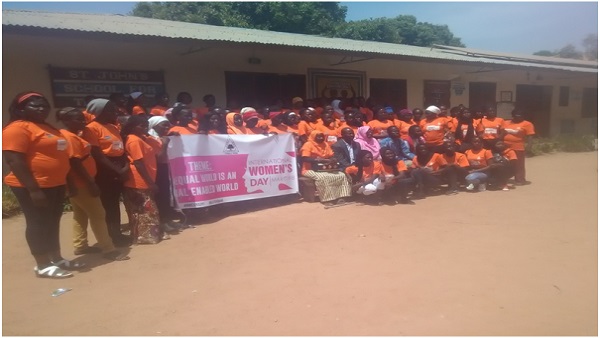 The female wing of the Gambia Association of the Deaf and Hard of Hearing, (GADHOH) on Sunday joined the rest of the globe in commemorating International Women’s Day, IWD.
It marked the first ever participation of Gambian deaf women in IWD, under the theme ‘An equal world is an equal enable world’.

Speaking, Madam Isatou Sanyang, GADHOH women’s development officer, said: “This day is very important for equality especially among the deaf people and disabled women.We are all part of the society, so we must be respected by the society.”

Sainey Camara, an official of the Department of Social Welfare, said IWD offers an important opportunity to reflect on progresses made and to call for action to urgent changes in the lives of women. He said the day was also to celebrate those ordinary women who played an extraordinary role in shaping the course of history in their communities.
“Therefore, the significance of IWD is dedicated to women around the world in celebrating their great successes in all aspects of life,” he stated.

He went on to praise the theme, saying it is aligned with UN Women’s new multigenerational campaign, Generation Equality, which marks the 25th anniversary of the Beijing Declaration and Platform for Action.

According to Camara, this declaration is recognised as the most progressive roadmap body fostering equality between men and women in order to advance women’s rights.
“However, there are issues faced by the world in the realisation of equality between men and women. Today, not a single country can claim to have achieved gender equality…Obstacles in our culture and laws remain unchanged.”

Mr Camara said his ministry came up with a strategic plan for the advancement of its mandates in protecting and promoting women, children and persons with disabilities.
“I therefore assure you government is not relenting in efforts towardsrealisinggender equality,” he said.

Adama Jammeh, chairperson, GADHOH Banjul branch, spoke at length on some of the issues faced by GADHOH women. She highlighted some of the achievements of GADHOH’s female wing.

“Some of [the hard of hearing or deaf] women who are married have faced alot of discrimination. Our girls are never taken to school to be educated or have access to education like others. Yes, we are deaf and hard of hearing but that does not mean that we should be discriminated and not be treated like others,” she lamented.

Mariam Johm, Network Against Gender Based Violence (NGBV), said women “remain vulnerable and suffer most of the time”.
Other speakers were Madam Adelaide Sosseh, deputy chairperson of TRRC.