Gambia prepares to use drones for disaster management 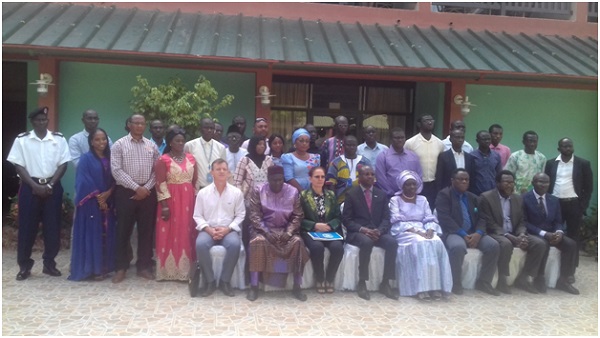 The government of The Gambia through the National Disaster Management Agency, (NDMA) launched a project to manage climate-related hazards.

They were in collaboration with the Unesco – the UN education, scientific and cultural organisation’s regional office for West Africa.

The project is being funded by the India-UN development partnership fund, entitled ‘using drones and early warning systems for pre-and post-floods disaster management in The Gambia.

The launching was attended by the Vice President Dr Isatou Touray accompanied by other government dignitaries including the regional director for Unesco’s West Africa office.

The executive director of NDMA, Sanna Bairo Dahaba, said the project will help the country achieve blueprints devised in the NDP – the national development program.

“In addition, it will also enhance the establishment of a functional early warning system as well as enhance the reporting Target G of the Sendai Framework for Disaster Risk Reduction 2015 – 2030,” he said.

“The Inter-governmental Panel on Climate Change (IPCC) lists The Gambia among the 100 critical countries most vulnerable to climate change and particularly susceptible to weather related hazards,” the Vice President Dr Isatou Touray said.

Agriculture is the main source of livelihood for majority of Gambians, and the vice president said constant floods affect the livelihoods of more than 70 percent of the population any time it occurs.

She said: “The UN had projected in its UN Country Team Harmonised Framework of support to The Gambia that in 2018 43,000 persons will require direct lifeline and 350,000 people shall be affected by disasters that include loss of productivity and food insecurity.”

She said since 2015 the country has been encountering a number of hazards affecting lives and livelihood, calling it one of the major threats in the country with a significant increase in the number of people affected.

Unicef resident representative to The Gambia Ms Sandra Lattouf, noted that the project is key to the attainment of national socio-economic development as it is expected to improve institutions and communities disaster preparedness and management capabilities.

“By mitigating the impact of natural hazards, we protect the environment, improve agricultural productivity and improve lives and livelihoods,” she disclosed.

The project also seeks to develop the capacity and readiness of the country in developing drones to commence disaster and climate risk assessments, and expedite rapid identification of damage to the physical environment and of endangered individuals in post-disaster situations.

It will also strengthen the warning system for floods across the country, including vulnerabilities, data collection, integration, analysis and communication of alerts or requests for action.