Gambians protest at US Embassy against police brutality 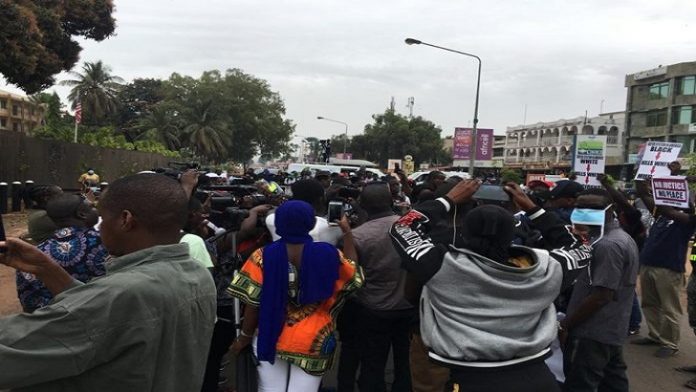 Scores of Gambians on Saturday joined the Rising Against Racism organisation to protest against police brutality in the United States in the wake of the police killing of a black man George Floyd.

The protesters who marched from the Pipeline Mosque to the US Embassy chanting ‘black lives matter’ and ‘no justice no peace’ handed over a petition to the regional security officer at the embassy, Rebecca McKnight, demanding an end to police brutality against people of colour in the US.

Organiser Momodou Colley said the petition was a demand for the United States to respect and protect the lives of black people.
He said otherwise they “cannot and will not allow [US] embassies to operate in our various countries while they continue to treat black people with complete disregard and contempt. The US government has a choice to make on whether they want to live in isolation or not,” he said.

The protesters stopped halfway into the march and placed a knee on the ground as they chanted, ‘black lives matter!’.
Two months ago, a white Minneapolis police officer Derek Chauvin pressed his knee on the neck of George Floyd for nearly nine agonising minutes resulting in Floyd’s death.
One of the protesters Modou MC Cham said: “It is high time we rose as black people and fight against injustice. Enough is enough. The civil rights of black people must be respected”.

Shortly after receiving the petition, McKnight delivered a message on behalf of the US Ambassador Paschall, which reads: “Those who peacefully gather to demand justice, an end to racism and discrimination and meaningful reform are putting into action the values of democracy and respect for human rights and human dignity for all. The US Embassy shares these values with Gambians and we thank you for this petition and opportunity to engage us on this topic.”