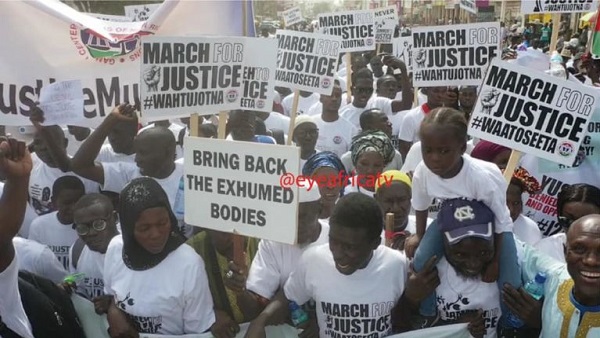 Barely a week after the opposition APRC staged a demonstration calling for the immediate return of former President Yahya Jammeh, hundreds of his victims Saturday took to the streets urging government to bring him to justice.

The march, punctuated by a chant of “we want justice,” was triggered by the urgent need to call on the Barrow administration to show a commitment to bringing Jammeh to justice.
The peaceful procession started from Westfield roundabout and ended at Bagadaji junction.
In a petition addressed to President Adama Barrow, and handed over to the government spokesperson Ebrima Sankareh, the Victims Centre reminded the Gambian leader about the magnitude of the crimes committed under Jammeh’s 22-year rule.

“A number of ordinary citizens, members of civil society including journalists as well as government officials, were abducted, arrested, illegally detained and imprisoned,” read the protest petition seen by The Standard.

The three-page petition also highlighted “other human rights violations concerns, including corruption and embezzlement of public funds, land or property expropriation, forced labour and fake HIV treatment that resulted to some deaths and other complications among people living with HIV.”

Speaking at the protest, the Victims’ Center chairperson, Sheriff Kijera said: “As far as we are concerned, we categorise Yahya Jammeh as a terrorist. He has been terrorising Gambians from July 1994 to January 2017.”

“Victims continue to raise concerns that despite the various testimonies by both victims and perpetrators alike, there still exists a section of our society that is in blatant denial of the atrocities committed by the former president to the extent of demanding for his return as an ordinary citizen, which is a mockery and a provocation to victims,” he said.

“It is against this background that the victims community and CSOs are demanding the following; the Gambia government to impose a ban or suspend the APRC party until the ongoing TRRC is concluded; the Gambia government condemn any threat towards the victims and take appropriate legal measures for remedy,” he added.
Other victims of Jammeh such as Omar Amadou Jallow (OJ) and Ousainu Darboe also took part in the protest.

The former PPP leader condemned the way the death row inmates were killed. “They were not executed…but suffocated to death.”
“One of them, Lamin Darboe, committed his crime in 1985. He was sentenced to death and Sir Dawda K. Jawara commuted it into life imprisonment,” he said. “We, as Parliamentarians, abolished the death sentence in 1990. Why should Yahya Jammeh kill Lamin Darboe in 2012?” OJ asked.

The UDP leader Ousainu Darboe condemned the way the APRC has been aiding and abetting Jammeh in all the alleged atrocities and accused the former ruling party of undermining the integrity of the truth commission.
“I think those people should really be arrested,” he said.