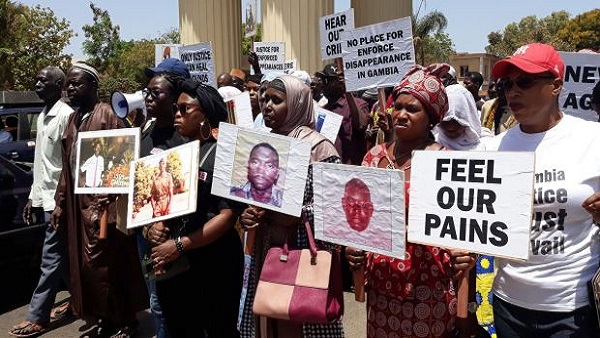 The Gambia Center for Victims of Human Rights violations under former president Yahya Jammeh has called on the Barrow administration to ban or suspend the former ruling APRC.
“We are strongly recommending that the government imposes a ban or suspend the APRC party, until such a time that the ongoing TRRC is concluded and its recommendations implemented to enhance a smooth transitional justice process for us to reconcile and unite as a people and as a nation,” the victims said in a statement read by Ayesha Jammeh at a press conference yesterday.
The victims argued that the APRC had banned first republic parties like the PPP after the 1994 coup.

“To further press on our demands for Jammeh to face justice, the Victims Center with the support of CSOs and other well-wishers, will organise a peaceful march for justice to pressurise the Gambia Government to prosecute Jammeh for the gross human rights violations perpetrated by him and his henchmen,” she added.

The victims are planning to protest on Saturday from Westfield Monument to Buffer Zone, where they will deliver statements and hand over their petition to the government.
“The Victims Center will continue to work with all relevant partners to facilitate justice for victims, through national, regional and international mechanisms to ensure that peace continues to prevail in the country to enhance the TRRC’s ‘Never Again’ slogan,” she said.
According to the victims, the APRC protest demanding the return of former president Jammeh to continue living in the Gambia as a free citizen is beyond mockery to the plight of victims.

“The same political party that enabled Jammeh to stifle the God-given voices of all Gambians, tortured, maimed, killed our loved ones and sexually abused our women for 22 years was given a permit to protest for the return of the most cruel and inhumane dictator who victimised the entire Gambia,” she added.

However the victims said they are also enjoying a moment of relief after the Attorney General’s strong statement at the opening of the 2020 legal year assuring them that Jammeh will immediately be arrested if he ever steps foot in the country.

“We look forward to the support of all CSOs, NGOs and the national and international partners in ensuring that the recommendations of the TRRC at the end of its mandate are implemented by the Barrow administration without selective justice and favouritism to enhance the healing process that we all are yearning for in the New Gambia,” she noted.
The chairperson of the Victims Center, Sheriff Kijera said Jammeh should have been issued with an international arrest warrant to face justice for economic crimes immediately after the Janneh Commission submitted its report and recommendations to the Gambian leader.
He described Jammeh as a special perpetrator and therefore any thought of him walking freely in this country would be unacceptable. “The moment he lands here he should be arrested and thrown to Mile 2 prison.”

Amadou Scattred Janneh, a victim of the Jammeh regime and member of the Center said: “I don’t think anybody will have a problem with the APRC carrying out their political activities but calling on Jammeh to return and denying that any atrocities had happened under his regime is a threat to our peace and stability. There is no way the civil society will allow a return to the status quo. It is going to be an insult to continue asking for Jammeh’s return.”

Janneh added that the APRC supporters may be delusional but Jammeh is not stupid to think that he can just come to the country and walk as a free man. “I think Jammeh is much more calculating than that,” Janneh said.