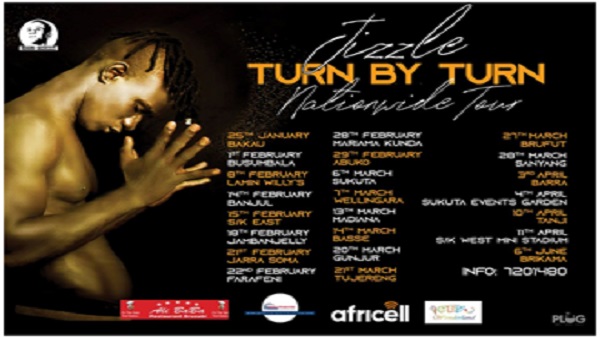 The Afrobeat artist has announced a “Turn By Turn” nationwide tour in support of his new album Finally on his social media platforms. The star, who recently delighted thousands of fans with the drop of his recent album will perform in Bakau, Busumbala, Lamin, Banjul, Jambangjelly, Jarra Soma, and other places.

Buoyed by the success of his first album – which focused on his journey as an artiste – the Bakau-born is said to be eyeing bigger plans for the year.
At 24, Jizzle is now one of the biggest names in Gambian music, filling venues like Penchami Hall and the Independence Stadium.

Born and raised in Bakau, Jerreh Jallow dreamt of becoming Gambia’s Ronaldo. “Music was not my passion, it was football”. Like most young men he spent most of his time on the football field. His older brother, Essa, known in the music industry as “Breaker”, was an aspiring artist at the time and Jizzle became curious about his work. Jizzle’s interest peaked as he watched his brother write and produce music around the home.

Jizzle’s achievements did not begin with the Wahsahalat Awards, one of his proudest accomplishments was in 2017, when he was nominated at the All-Africa Music Awards for the Best African Hip/Hop Artist with his 2017 hit song Man Of The Year ft Atenola. He travelled to Nigeria for the occasion and met some of the biggest names in West African music. “It gave me a chance to see another part of Africa and network with a lot of big name artists that I admire.”

And now, the artist has become one of the country’s most loved crooners which recently manifested through the launching of his album at the Independence Stadium filling the venue with fans from all over the country and beyond.