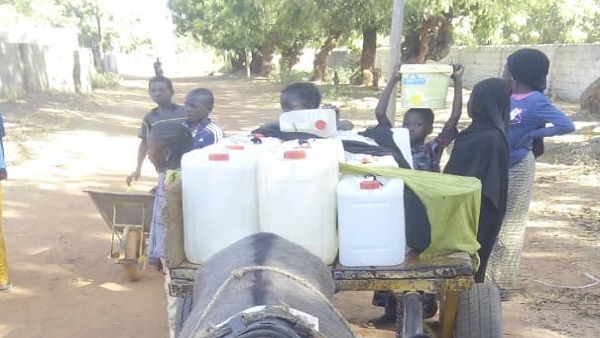 The main water borehole in Kerewan, North Bank Region has broken down leaving thousands of inhabitants without access to potable water.
The water shortage was first reported on last Wednesday and the surrounding villages of Kerewan, Suwareh Kunda, Kinteh Kunda and Saaba all dependant on the water source, were also affected.

We visited the regional administrative capital and saw cars, donkey carts, bicycles and motorcycles loaded with containers of water drawn from faraway villages.
Bakary Fatty, a son of the alkalo of Kerewan, said that since before the breakdown the water pressure from the borehole had “drastically lowered” and sometimes stopped completely when electricity goes off. “For a long time, we have been asking for more boreholes to avoid scarcity in the event of a breakdown. Now I use my car to go to Gunjur or Darsilameh, some nine kilometers away to fetch water while others use donkey carts or motorbikes”.

Kemo Ceesay of the Kerewan Village Development Committee said government “must do something quick” to avoid further hardship as there are over 4,000 people affected living in this town and surrounding areas.