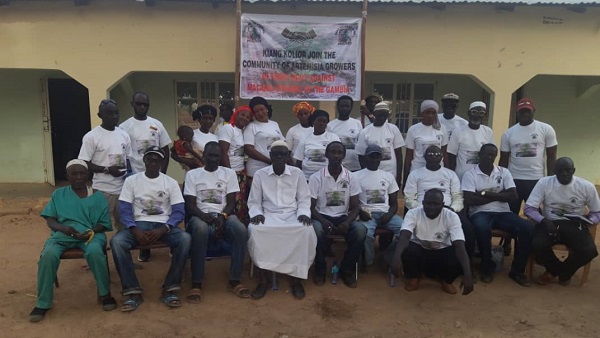 The Kiang Kolior Youth Development Association, in partnership with the Sannehmentereng Artemisia Growers Association in Brufut recently conducted a one-week training for 20 people from Kolior village on Artemisia.

Artemisia a plant used for over 2000 years by the Chinese for the treatment of malaria and fever is now becoming increasingly popular and grown around the world.
The project in Kolior is sponsored by the German Ministry of Health and is coordinated by the Kolior Youth Development Association with technical support from Sannehmentereng Association who have had a long history and expertise in the development of the plant in The Gambia In his opening remarks, Momodou Lamin Sanneh, vice president of the Kolior Youth Development Association stated that the project was part of the association’s objective to improve the living conditions of the community of Kolior and thus hoped that the end results would be realised.

“We have four experts from Germany and their Ministry of Health has given us support to put this structure here for this training to take place,” Sanneh added.

Bakary Jassey, president of the Kolior Youth Development Association, said Kolior is fortunate to be the second village to have the Artemisia project sponsored and thanked the German experts for their help to the villagers in its fight against malaria, and urged the participants to take the training seriously in order to ensure that the knowledge they are going to acquire be disseminated to others accordingly.