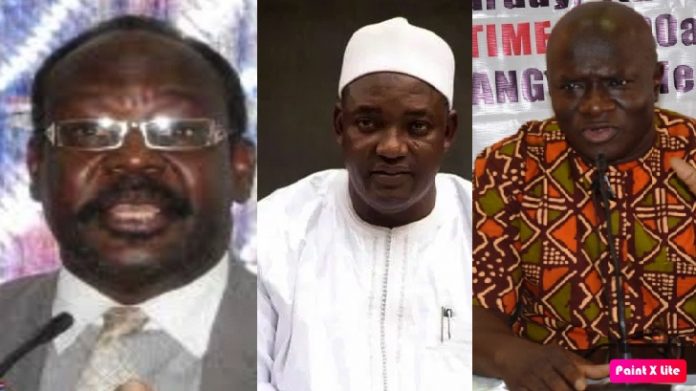 I cordially invite reference, to an eye-catching article titled: “Rights activist urges President Barrow to withdraw comments against media”, published in the internet on 3rd November 2020, by Sulayman Waan, as a commentary on Mr. Madi Jobarteh’s aforesaid scathing attack.

Paragraph 2 of Mr. Waan’s article inter alia reads: “President Barrow told Journalists, you are not Politicians, you are very important in the Society, but you should write independent news, correct news. You see if you give us correct news, if you go home you sleep. If you are not doing that, know that you are destroying your career. But if you are doing that, you will prosper. We are in the 21st Century, let’s work together”.

His Excellency President Adama Barrow finally said: “….. But if you are doing that, you will prosper. We are in the 21st Century, let’s work together ………” Here again this utterance of His Excellency President Adama Barrow, was clearly a fair comment. He was rightly telling Journalists, that prosperity will be their portion, for doing their work professionally and ethically. This rightly implies that if Journalists, woefully fail to do their work professionally and ethically, their portion will be adversity. This is just plain commonsense talk, which is far from being: “very dangerous”, as Mr. Madi Jobarteh bogusly wrote, and any professional and ethical journalist, will never take this utterance in a negative light. “Who the cap fits, let him wear it”, as the adage goes. Google authoritatively explains the meaning of this idiomatic expression, as: – “The Idiom is used, to tell someone or a group of people, that if they think, that a criticism is alluding to them, then they are the ones who will react negatively, because they are guilty of the criticism in question.” Let me make it abundantly clear, that His Excellency President Adama Barrow, didn’t in any way, criticize Journalists. On the contrary, he was plainly and honestly telling them: “The truth, the whole truth and nothing but the truth…”.

His Excellency President Adama Barrow, rightly and honestly told Journalists: “We are in the 21st Century, let’s work together…” What he positively meant by this statement was: gone are the primitive days, when Journalists made it a hobby of always acting, unethically and unprofessionally, with impunity. We are now in the 21st Century, therefore all ethically upright Journalists, must comply, with their professional and ethical standards. Nothing short of this will suffice, and non-compliance, is not an option. Again, this is just a fair comment.

Paragraph 4 of Mr. Waan’s article reads: “However, Madi said on his Facebook: “It should concern each and every citizen, that President Barrow would face the Nation, to appear as if he was providing good advice to the media, when in fact, he was threatening the Media. To make a blanket statement that, the Media should be neutral and report the truth, is in fact saying the media is untruthful.” That was a very bizarre, irrational, unfounded, and totally unacceptable fraudulent misinterpretation, of His Excellency President Adama Barrow’s utterance. This is a clear evidence of the fact that, Mr. Madi Jobarteh, is indeed linguistically bankrupt, and he was just attacking His Excellency President Adama Barrow, maliciously and unjustifiably, just to get cheap popularity as usual, from simple-minded or naive people. “In the Kingdom of the blind, the one-eyed man is King”, as the adage goes.  Firstly, his laconic statement: “It should concern each and every citizen…..” was a big insult, on the Queen’s English, or The Oxford Advanced Learner’s English, because this is unacceptable tautology or a repetition, since:- ”each  citizen”, clearly means the same thing, as “ every citizen.” Once he wrote “each citizen”, it was therefore explicitly not necessary at all, for him to also add “every Citizen”.

His Excellency President Adama Barrow was indeed, as “The Father of the Nation”, giving good presidential advice to all media practitioners, “ uberrimae fidei” (Latin:- ie in utmost good faith). If he had clearly told Journalists: “… that if you fail to do your work, professionally and ethically, you will face the full force of the Law…”, then this would have been an open threat to all journalists But His Excellency President Adama Barrow, as most patriotic Gambians know, is indeed a very law-abiding president, therefore such an irresponsible utterance, will never surface to the landscape of his mind.

Mr. Madi Jobarteh finally bogusly wrote in his aforesaid article: “ ….. To make a blanket statement that the media should be neutral and report the truth is in fact saying, the Media is untruthful…”. This was yet another unacceptable and malicious distortion of His Excellency President Adama Barrow’s utterance. How on earth, could Mr. Madi Jobarteh, read untruthfulness into this innocent Presidential advice to Journalists? If His Excellency President Adama Barrow, intended to tell journalists, that their reports were not neutral and truthful, once he has evidence of this, then he would have overtly and unambiguously told them so, because he clearly cannot be afraid, to tell Journalists “The truth, the whole truth, and nothing but the truth….”, because Journalists are neither scared cows, nor are they, above the Law.