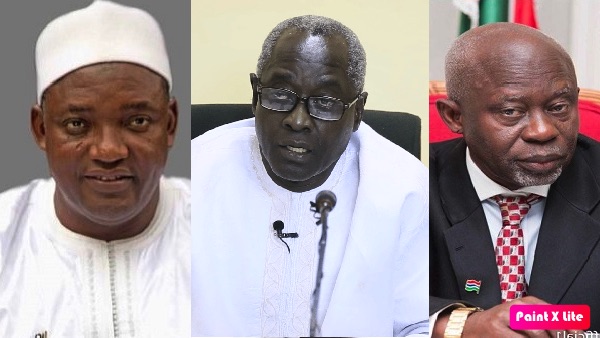 In 1977, Ousmane Sembène, the Senegalese author and radical socialist intellectual, considered as the father of African cinema, released his film, Ceddo. Senghor, the frenchized president of Senegal at the time, banned the film, arguing that Ceddo should be spelt with a single ‘d’. The underlying theme of the film is what political scientists today would call ‘state capture’. The late Sembène protested and said his goal “is not to please the government.”

By the time The Gambia heads to the polls in 2021, COVID-19 would have been brought under control, paving the way for a global economic recovery and the (re)influx of foreign aid to low-income countries. Although, about 49% of the youth will be sitting at home without going to any training or employment. Not only that: 2021 will be a watershed moment because it is the first time Gambia’s political landscape will be inundated with new and very young faces, (probably) accompanied by a new Constitution that Gambians have never been exposed to before. But 2021 is also going to inspire goosebumps because it is the year that is going to decide the future of the country for the coming decade. The question is how?

It is July 2021 and the IMF and other donors have identified The Gambia as one of those hard-hit economies under 2020 and therefore, have agreed to some economic recovery packages. International lenders and donor countries will swamp the State House, donned in expensive clothes that evoke a general feeling of a postcolonial expatriate life and bourgeois palatability.

All this is happening while the July-rain is sweeping away villages and schools and making the Serrekunda market unwalkable. As has been the case before, the funds are misused and redirected to fulfilling other political agenda. The opposition will call for accountability, raising fear of potential ballot rigging and voter fraud. Come December: This will embolden the electorate and add resentments in a population that is already disillusioned with institutional kleptomania. Protests will erupt, tear-gas will be employed, and the opposition will be arrested. In this short work, we wish to contribute our voice to the ongoing discussions about 2021.

When Jammeh left, reformers called for a new Constitution, seeing Jammeh as the only problem the country had faced since 1994. The view that a new Constitution was the panacea to the country’s democratic deficiency was and is still a demonstration of political naïveté.  As one of us argues somewhere (https://standard.gm/gambias-main-problem-is-not-the-new-constitution/), Gambia’s perennial problem is not the 1997 Constitution: The problem lies on its weak institutions and bureaucratic lethargy. So far, D160 million has gone into drafting the new Constitution. This amount is more than the combined 2021-budget of the Ministry of Justice, where our impartial judges work.

The new Constitution, they have argued, has the potential to help the country in its effort to democratise. Therefore, for many people there is no successful democratic transition without a new Constitution, as the 1997 Constitution is a tool for political entrenchment. What some people have failed to understand is that a constitutional document cannot guarantee social stability.

Now, the new Constitution gives hope, but it fails to pass the test of parliamentary politics. Those who oppose the constitution largely cited that the draft Constitution discriminates against Barrow and favours his political godfather, UDP’s Ousainou Darboe. The debate then revolves around the eligibility of Darboe vs. the ineligibility of Barrow. This means that some members of the National Assembly have given more precedence over these two leaders than national interests. But that is politics!

However, this also means that the 2021-election will likely be contested under the ‘problematic’ 1997 Constitution, where the winner takes all and can continue to be the President for the next twenty years. Undoubtedly, this is the preferred strategy for Barrow whose overarching goal is to consolidate his influence and remain in power for those years. Although the political environment has been liberalized and many parties have been registered, contesting elections under the current political framework can potentially limit multiparty contests and create a system of de facto oligarchy.

In the 2016-presidential election, 886, 578 Gambians registered to vote, but only 59% turned out (523, 081), of which Jammeh alone was able to canvas 40%, GDC 17%, and the Coalition 43%. The current government was voted into office by less than 250, 000 people. The number of voters is expected to increase in 2021, as new political parties have begun to breathe some air of hope and build their structures and bases.

On the one hand, if the country goes to the poll with the 1997 Constitution, we will likely have a government voted by less than five hundred thousand people (about 25% of the population). That means 75% of the population will be led by a leader they would not invite for dinner. This is a perfect recipe for civil and political unrest. On the other hand, if the new Constitution comes into effect before the election, we will very likely have a Coalition because no single party can win more than 50% in the first round.

A 2019-survey by the International Republican Institute (IRI) shows that out of the 45% Gambians who said they identify with a political party, 27% is UDP, 25% is Barrow, 14% is PDOIS, and APRC has 13%.  However, with the coming of Citizens’ Alliance (CA) and the existence of other ten parties, the political environment has become fluid. Therefore, any extrapolation for a future Coalition must be predicated on this context. Thus, our current predictions:

Barrow’s NPP is relatively new, but it is the fastest expanding political party in The Gambia. However, this is not because Barrow offers Gambians better policies and programmes; rather, it is because the party benefits from patronage politics, entrepreneurial politics, and the grassroot political experience of Hamat Bah’s NRP. Without NRP, Barrow’s success, especially in Niamina, will be hanging by a thread.

The recent Niamina by-election shows that the Barrow-Bah coalition will continue into 2021 and possibly be expanded to include other small parties and independent candidates. So far, Barrow’s co-optation tactics suggest that it will not only build a Coalition with smaller parties but also attract key (and disgruntled) individuals from established parties like UDP and GDC.

UDP, GDC and GMC are possible allies, and few disagreements will do little to jeopardize this relationship. Although small, GMC is a very vocal party and a party that will champion its cause. What is new and strange to many is the recently forged relationship between UDP and GDC. Many have pointed to the fact that the reason GDC lost the Niamina bye-election was their relationship with the UDP. Although such claims cannot be substantiated, it is evident that both parties are losing ground to president Barrow. Both parties can make some gains in 2021 if they explore their relationship and strength. However, the stumbling block to address is the leadership selection process, given that each will want to be the flagbearer. It is important to remember that the main reason GDC refused to join the 2016-coalition revolves around this issue.

Another group that may likely adopt a tactical alliance like the one we saw in 2016 is the PDOIS-CA led alliance. This alliance will likely be ideologically focused and leftist – whatever that means. Although PDOIS is the established party, CA has come out with a strong political credo and is projecting new and maiden dynamism as the party to ultimately solve Gambia’s leadership problem. The party, like PDOIS is beholden to technocratic governance; but unlike PDOIS, it presents a striking contrast to the ageing and politically stultified politicians in the country.

In politics, the kingmaker is the political party that has received a very few votes but gained more power. This can happen when the party supports a coalition in exchange for positions in the government. To win the 2021-election, any smart politician cannot ignore the comatose strength of the APRC. The party will likely control 13% of the votes, despite its legacy of repressions and the ongoing revelations at the TRRC.

Given its support base, APRC will likely join a Coalition which has a pragmatic position on national reconciliation, including the possibility for Jammeh’s return and the return of APRC’s forfeited assets. So far, the only party that is more focused on that is PDOIS. Two parties that the APRC is unlikely to form an alliance with, are UDP and NPP, unless Barrow begins to publicly appease them. When Barrow does so, this will likely lead to a split in the APRC camp and a further fury among some of Barrow’s sympathisers.

Coalition politics contains large elements of the incalculable. And many of the current Gambian voters are not used to the politics of coalition. Elite consensus, political jockeying, and the competition for meagre resources are major hallmarks of a coalition government. Recently, Madi Ceesay (UDP’s MP for Serrekunda West) called on opposition parties to come together to remove Barrow like they did with Jammeh. The underlying premise of this statement is that Barrow can only be removed from power when and if the opposition parties come together and form a party-led tactical alliance.

However, another Coalition government runs similar risks like the one we have witnessed since 2016. In our case, party leaders in any potential Coalition will be competing for positions and the country’s meagre resources that donors carry with them into the country. This will not serve the interests of the broader citizenry, but those of the winning politicians, their respective parties’ foot soldiers and credit card supporters. Therefore, Coalition-2021 will disassemble before it finally disintegrates, decays, and takes the life of frozen fish.

Now, it will be remiss of us to not admit that we have great politicians who live for politics, but it will also be tantamount to intellectual bankruptcy if we fail to see that some of our politicians live on politics. While the former provides hope for the greater good by providing sound political debates, the latter is running around preying on society for their own selfish interests.

Finally, it is important to remember that Gambia’s political transition is fragile, given the snail’s pace reform of the security sector, widening socio-economic crisis, and political polarisation. Consequently, some indicators are pointing to some periods of political crises that will go on beyond 2021. The outcome of these crises will be determined by how much the audience (the citizens) is involved in it and who is in power. It is equally important to note that Gambians of all walks of life, particularly teachers, filmmakers and journalists, have reached a period of real awakening. Like Ousmane Sembène, their vocation should include creating a greater civic awareness and helping citizens understand the labyrinth of politics (through their works), without which the country is headed for unstable government(s) with no sense of direction.

Jeng is a Political Scientist at the Uppsala University, Sweden ([email protected])