Major Lamin Fatty, a senior officer of the Gambia army yesterday urged the TRRC to thoroughly investigate the November 11 foiled coup to ensure proper identification of the people involved in the killings and other misconducts. 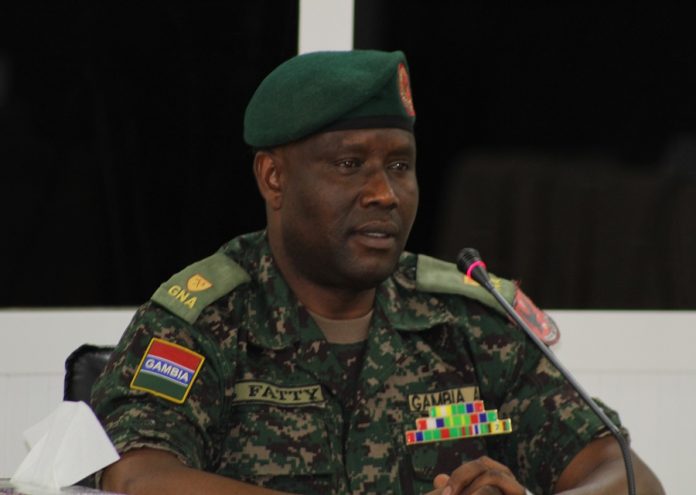 Major Lamin Fatty, a senior officer of the Gambia army yesterday urged the TRRC to thoroughly investigate the November 11 foiled coup to ensure proper identification of the people involved in the killings and other misconducts.

In the absence of this, the witness went on, there is chance that innocent individuals may be implicated.

Fatty, a former bodyguard to the ex-junta strongman Edward Singhatey and now the second in command of the 1st Infantry Battalion Yundum, accused some commission witnesses of distorting facts surrounding the involvement of some ‘innocent’ soldiers including himself in the November 11 incident.

He warned that ‘innocent people could be wrongly tainted’ if the commission did not do anything in considering the motives of some witnesses. During his testimony, the commission reviewed videos of earlier testimonies of Abdoulie J Darbo, Alagi Kanyi and Lamin Senghore, the ‘Assassin’ all of which alleged Fatty’s involvement in the execution of detained soldiers in the bush near Sifoe, including his own cousin cadet Amadou Sillah.
Fatty described those testimonies as lies of the century. “All of them lied about me,” he told the commission
“I was not in the bush on that day and it could have been a mistaken identity but between me and Allah I am not that son who would kill my own brother no matter what happened or who ordered me. I urged the commission to continue investigations to identify how many vehicles went to the bush in Brikama and their occupants. Let us investigate and come to the bottom of the truth,” the Essau native added.

Fatty further testified that he did not participate in any activities of the November 11 massacre until soldiers were taken for execution at the bush. He recalled spending the night of November 10 with one Kantong Marenah at Edward’s residence in Bakau when he vacated the Barracks to go and inform him of the uncertainty in the Barracks and a possible planned coup against the Junta as army intelligence at the time.
Fatty, who joined the military in 1988 however admitted his participation in the arrest and brutalisation of army medic Modou Njie and couple Alagie Kebbeh and WO2 Abdoulie Trawally, all accused by the junta of involvement in the attempted coup.
According to him, this arrest came after Edward Singhatey issued him a list of names of wanted soldiers.

He admitted meting inhumane treatments on the arrested soldiers before Edward and Peter Singhatey later shot Njie and Kebbeh with pistols who sustained serious injuries.
“I want to apologise to all the victims I arrested that I have regretted these actions in totality. It all happened in my youthful age and I plead to the commission to have a human face and pardon us,” Major Fatty pleaded.

By Omar Bah The leader of the former ruling People's Progressive Party has condemned the increase in hate ethnic remarks in the country. “If we allow...
Read more
News

By Alagie Manneh The opposition All Peoples Party (APP) has joined the widespread condemnation of the charges against pro-democracy and human rights activist, Madi Jobarteh. Jobarteh...
Read more
- Advertisment -