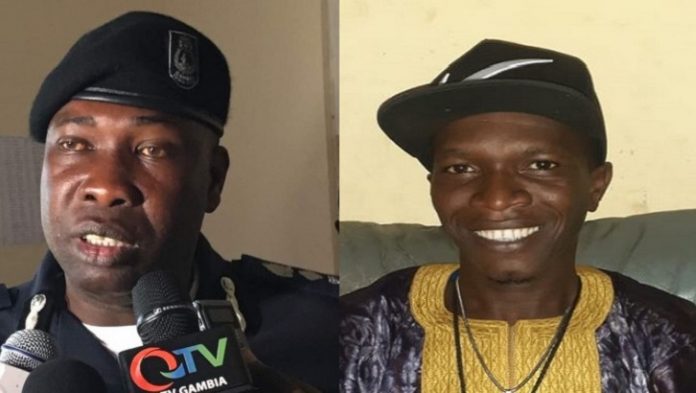 Lamin Kinteh, a 32-year-old Gambian based in Italy, has accused Anti-Crime Unit boss Gorgi Mboob of refusing to return his 250, 000 euros he confiscated from a marabout who hypnotised him.

Kinteh said when he was coming to The Gambia a few months ago for a business trip, he came with 250, 000 euros with the intention of buying an already built house.
“I wanted to use the money to buy an apartment in Jabang for D11.5 million. But a cousin of mine I called to share my idea of buying the compound, told me since it is a tradition for people to put jujus in their compound before moving in for protection, I should follow him to one marabout called Alieu Jarra at Tabokoto. But little did I know my cousin had conspired with the marabout to defraud me.

“My cousin (Lamin Kinteh) had already told the marabout every single thing about me. When we arrived the marabout (Alieu Jarra) pretended as if he was communicating with a demon and started telling me how my mother died and how I and the entire family were going to die if I bought that compound. He said I should wait. He will give me some herbs to drink and wash my body,” he told The Standard.

Kinteh said the moment he drank the herbs he was hypnotised. “The marabout then asked me to give him a car and my compound document which I did. The day I collected the 250,000 euros to go and pay for the house, the marabout called me again. Buba Kinteh and Lamin Sanneh are my witnesses – he told me I was proven to be stubborn but if I buy the property I will die”.

“We believed in what he said because we wondered how he knew about our plan to buy the compound that very day. It was later that I realised it was my cousin who informed him. He asked us to come to his house. When we arrived, I asked him what next? He told me  to give him the money. i gave it to him. but my friend i went with to the marabou became  suspicious – he decided to go to Kiang to see a marabout who told him I should also go there to meet him. When I arrived, the marabout told me I was hypnotised – he gave me some herbs which turned everything around. Immediately my mind went to my 250,000 euros,” he said.

He continued: “I went to Alieu Jarra’s (marabout) house with my brother Buba Kinteh and Lamin Ceesay. When we arrived, the marabout said I should go until 3pm and come back for my money. I insisted and asked the people I went with to wait while I informed the security officers. I came back to the house with two security officers who asked the marabout to produce the money – he took out his phone and called my cousin and one Sinbong and asked them to come or else they will die”.

“When they arrived, the officers collected my compound document from Sinbong –and arrested both of them with the marabout and took them to the CTI where the drug squad is stationed. A call was later made to the anti-crime at Bijilo where officers from the anti-crime unit came with a white pickup and collected the suspects. When we arrived at the anti-crime, the marabout confirmed that the money is with his wife.

“Gorgi Mboob later took me to a marabout in Bundung to see whether Alieu Jarra took the money or not. The marabout told us the money was huge but it is in the possession of a slim lady. We went with the marabout to anti- crime with three white kola nuts and when we arrived, they went into Gorgi Mboob’s office. I cannot tell what they were doing there but the next day Gorgi Mboob said we should go to another marabout at Tabokoto and when we arrived there, that marabout gave me charm and something he said I should put it under my tongue,” Kinteh said.

He added that Gorgi Mboob on the same day called the wife of the marabout who hypnotised him to come at the anti-crime and bail her husband but she was arrested immediately she arrived.

“I went to the anti-crime with my younger brother the following day and the lady was interrogated in our presence and she confessed that she is in possession of the money and agreed to go with the police to give it back. I thought the police would have immediately left with the lady to get the money but I was wrong – it was not until in the evening when everybody left that they went to collect the money. But luckily, the moment they collected it I received a call from the lady’s brother (Tijan) that the money was handed to the anti-crime.

“I went to anti-crime the following morning just to realize that the lady was released and Gorgi Mboob called me to ask how I was able to get such money. I told him everything and where I even hid my money. I showed him all my documents and my car business documents including the vehicles that I bought and the people that gave me money to buy ten-wheel-trucks and small cars for them.

“He dispatched some of his officers to Sanyang to see where he kept the money in a holeand when the team returned, he called me into his office and said to me that I should go to GRTS to praise the Anti-Crime for their good work. I then told him I can only do that if I have my money and I promised to give him D500, 000. But he said how could they have only half a million for all that hard work,” Kinteh explained.

He said he together with National Assembly members Saikouba Jarju, Samba Jallow and one Yusupha Sillah met the IGP in his office over the matter.
Kinteh explained that when he arrived in Italy, he married a close relative of former footballing great Paulo Maldini who gave him 20, 000 euros to start a business.
“I bought some vehicles and some second hand materials and shipped them to The Gambia. The business became so successful. I also work at different places including Amazon at one of their branches in Italy, kindergarten schools to train kids on how to make our local drums with cement papers. I also work at a salon and a restaurant in Italy,” he said.

When contacted for comments, the anti-crime boss, Gorgi Mboob tersely said: “Do you think I will arrest the marabout – take D14 million from him and at the same take him to court. All what Lamin Kinteh is saying is between him and God”.
The Standard has confirmed that the case, which was presided over by magistrate D. Phatey of Bundung court, has been withdrawn by the prosecution since 3rd June 2020. The police have since conducted another investigation, this medium understands.