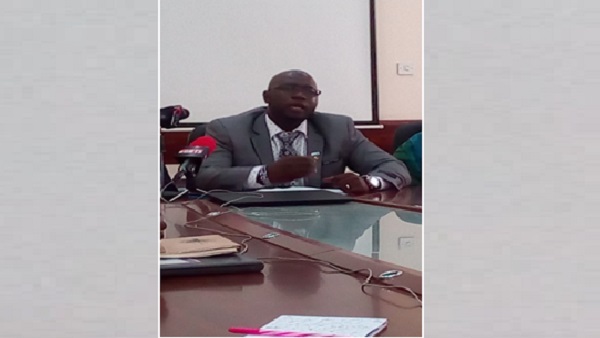 A programme officer for an expanded government programme on immunisation said Thursday that a nationwide campaign against meningitis will start early next month.
Saharu Kanteh said the health ministry and its partners will vaccine about 416, 613 children aged 1 – 7.
He made the disclosure last Thursday at a press briefing organised at the Malaria Control Office in Kanifing.

“The programme will start from the 2 and end on 8 February 2019,” he said.
Kanteh said the objective is to “eliminate epidemics of meningococcal meningitis due to zero type A in The Gambia.
“The campaign will target all children aged 1 to7 for MenA vaccine (416,613), 6 to 59 months for vitamin A (373,381), 12 to 59 months for Mebendazole (314,426).
“In order to reach this target, two strategies will be used first fixed post (these posts are located at permanent health facilities where immunization will be provided during the seven days of the campaign. These facilities will also be used for the storage and distribution of vaccine to mobile teams depending on the population density).”

He said the second strategy involves the use of mobile posts which are located at schools, churches, mosques, market places, and transit points.
He recalled that the last meningitis mass vaccination campaign in 2013 registered an administrative coverage of 104%.
“Since that campaign, cases have tremendously reduced, however, there is a need to conduct a catch-up campaign for the new birth cohort in order to sustain the gains made with regards to reducing the cases of meningitis type A,” he said.

Meningitis is a rare infection that affects the delicate membranes — called meninges — that cover the brain and spinal cord.
According to Kanteh, the disease can be transmitted from an infected person through droplets of respiratory or throat secretion and some of the signs of the disease are still neck, high fever, and sensitivity to light, headaches and vomiting.