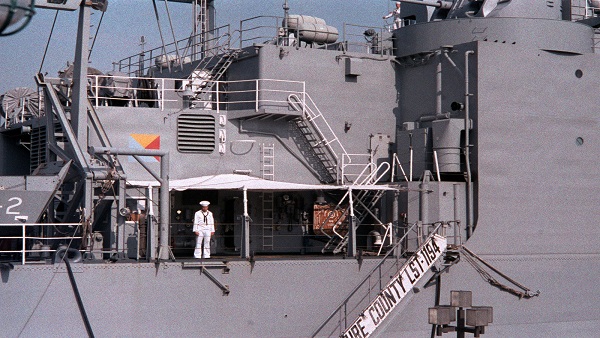 The 22 July 1994 coup d’etat found me serving the Gambia National Army (GNA) as the military staff/liaison officer at the Gambia Ministry of Defence located at the State House in Banjul.
The position was created to have a senior army officer representing the GNA at this key government department tasked with handling military issues consistent with civil matters of the government.

Hence, the coup found me at the final phase of an assignment to facilitate a training exercise arranged by The Gambia and US governments for a mechanised US marine detachment and the GNA. It took three months for me and the American ambassador in The Gambia at the time Andrew Winters, his political adviser James Knight and their defence attaché stationed in Dakar, responsible for The Gambia, Senegal and Guinea Bissau, Major McClain, to coordinate and finally get the Navy battleship carrying the US troops to The Gambia.

The USS La Moure County arrived at the port of Banjul in the afternoon of 21 July 1994. I went with Mr Winters, Mr Knight, Major McClain and the permanent secretary at the Ministry of Defence to the port to receive and brief them on the programme. The captain of the ship was an African-American called Captain Bookhart. After taking us around the ship and showing us a few of their arsenals, including new amphibious tanks to be tested, the ambassador briefed them on the next day’s programme. The exercise with the GNA was the main one. The navy band was to perform for the Banjul community at McCarthy Square, Captain Bookhart was to visit the vice president and minister of defence first, after which he would pay a courtesy call on the mayor of Banjul.

The captain would then be escorted to the Gambia Marine Unit Headquarters where a ceremony to hand over a US donated new patrol boat, named Bolong Kanta, was to take place. Three new 50 calibre machine guns to be mounted on the patrol boat were also to be officially handed over. The last event in the programme for the next day was a reception and dinner hosted by the US ambassador for the guests and some invited military and government officials. We left the port around 7pm ready for action the next day.
But before going further, I find it necessary to as usual do some fact-check on the depositions of the last witnesses from the security forces at the TRRC, especially that of Captain Ebrima Kambi’s and briefly on that of Dr Binneh Minteh’s, since the latter’s testimony is incomplete.

Starting from where the captain mentioned the traumatic effects of the 6 September incident on me, he accurately explained and demonstrated how I used to twitch, which he said meant that I was “off”. I don’t know whether “off” was the exact word he used in his written statement, but since the counsel was not adamant as usual for him to call it madness I guess that is what he wrote down in his paper.
Again, mimicking the twitches was quite accurate but without the ever-present head towel over my head the depiction got slightly distorted to be rated perfect.

The captain had all the right to even say that I was mad and wouldn’t have bothered me the least because of his innocence. Like I said in my last paper, he was among the detainees who were never in the picture of the acting I staged. Nonetheless he had shown me genuine sympathy by frequently coming in and out of my cell, offering me cookies (biscuits) and juice every morning. He didn’t say all that at the TRRC. He probably forgot and hardly could remember all the things we did together. He even forgot about me when asked to name those present at the State House and at the prisons until prompted with leading questions. Quite amazing!
I was however tempted on a few occasions to explain the madness drama to Mr Kambi especially during our daily Scrabbling competitions outside the prison block but my confidence in him was somehow eroded from our first encounter before my arrest and detention. No need to go into that.

In fact I almost told him in October, when the first batch of detainees was unexpectedly released, that really boosted everybody’s hopes into believing that the end had begun.
Among those released were Captain Momodou Sonko (GNA), Captain Benjamin Wilson (GNA), Captain Alieu Ndure (TSG), 2nd Lieutenant Alagie Kanteh (GNA) and 2nd Lieutenant Yankuba Drammeh (GNA).
Then not long after, the 11 November 1994 attempted “counter coup d’etat” happened, rocking down our spirits to the lowest ebb. The killing of GNA officers and soldiers for the first time raised our suspicion of the obvious, that Edward Singhatey was involved in the killing splurge of about eleven young men.
I confirmed my fears after my freedom and reinstatement in to the army in 1995. The details are in my book.

That sad incident changed our attitudes towards each other with everybody being extra careful about whom to trust with any information. We were now convinced that what happened to the victims in November was most likely intended for us in September. Singhatey just didn’t get what he wanted.
In March or April 1995, I finally decided never again to tell the captain about my secret performance. His brother in law, the elder brother of his wife, Ousman ‘Koro’ Ceesay (RIP) was appointed Minister of Finance of the AFPRC government and unlike other civilians he was co-opted as an active member of the council. That essentially changed the mood in the prison, especially when prison officers started talking about the imminent release of Captain Kambi with prospects of a waiting appointment for him to a public office.

I could recall Prison Officer Sergeant Susso on two or three occasions coming to confidently relay the message that Kambi was going to leave in the next day or two. We all celebrated it with him with the expectation that he could help out there to get us out of the hell hole. Of course in the end, we started to have serious doubt about Susso’s messages but not in the presence of the buoyant captain. Indeed, we were all now careful about uttering derogatory remarks about the government in his presence. He now was treated with special privileges as the brother-in-law of the AFPRC Finance Minister.
At the time I was released in May 1995, none of us would have imagined any detainee leaving Mile 2 before Captain Ebrima Kambi.

In June 1995, a month after my freedom, his brother-in-law, Ousman ‘Koro’ Ceesay, still the AFPRC Finance Minister died a mysterious death in car “accident” burnt to ashes that many Gambians concluded was a staged execution of the gentleman, bearing hallmarks of the complicity of the Singhatey brothers. The details are in my book. It was heartbreaking.
Anyhow, up to before Prison Officer ‘GV Paint’ testified, with his false story that I was not alone among the detainees mentally affected by the torture but that the late Kebba Ceesay (RIP) and IGP ‘Press’ Jagne were also visibly affected, no one among the first four witnesses talked about them. Everybody just repeated the same thing that Samsudeen Sarr alone was “the madman” but never Kebba Ceesay or Press Jagne.
I therefore hate to say it but I believe that part of Mr GV Paint’s statement somehow influenced the talking points of Captain Kambi who in effect branded the former NIA boss Kebba Ceesay as equally traumatised or having “lost it” like me and attributing it to his age.

Kebba Ceesay died naturally years ago and it is therefore convenient for anyone to now vilify him as being weak and vulnerable; but trust me, despite his old age at the time I know that Mr Ceesay was as resilient to the harrowing prison conditions as any of us. He even used to lead the Saturday night suku songs to motivate and pray for all of us.
As for the former IGP Pa Sallah Jagne, the fib will not gain any traction because he is alive and will not sit by and allow anyone to assassinate his character.

I doubt as to whether the commission ever bothered to ask the question of the duration it took for me to recover from my madness which may have been rather irrelevant before; but after Mr GV Paint came up with the never-heard-of timeframe, verifying it with Captain Kambi would have certainly been relevant to determine the credibility of the prison officer.

Samsudeen Sarr is a published author, former diplomat and commander of the Gambia National Army. He now runs a vehicle repairs services in Kotu.