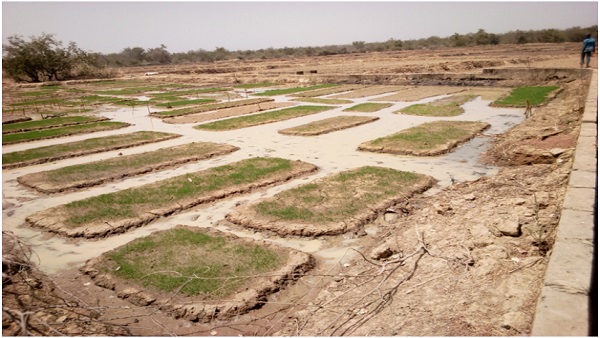 Through the Agricultural Value Chain Development Project, (AVCDP) officials of the Ministry of Agriculture over the weekend handed over two rice field irrigation schemes to contractors for onward construction.
The fields are located in the villages of Limbambulu Bamboo and Changally Langkaddy in the Upper River Region.

The contractors are MD Construction and NSANO Enterprise.
The officials also took time to visit some water retention dykes and spillways which are being funded by the Food and Agriculture Sector Development Project (Fasdep) in Koloir, Misera, Karantaba Wanja and Bambadala in LRR and other places in CRR and NBR.
Speaking at the handing over ceremony, Karamo Sillah, on behalf of the villagers expressed joy with the ministry’s consideration and described the initiative as timely.
He said the villagers of the communities have been faced with “a lot of challenges” at the rice fields.

“Hippos are tampering with our crops. There is also the issue of poor road networks hindering us.”
In response, the permanent secretary I at the Ministry of Agricultural, Hassan Jallow, assured the villagers that those challenges “will soon be a thing of the past.” He said the project came to address those issues.
He told them that his ministry was still working on expanding the project with other partners.

PS Jallow said he is hopeful that the contractors “will live up to expectations.”
“This is not the first time we are working with them,” he added.
He said the goal is to increase food self –sufficiency.
Kebba Jarju, project director of Fasdep said the tour availed them the chance to monitor the progress of ongoing land development projects under Fasdep.