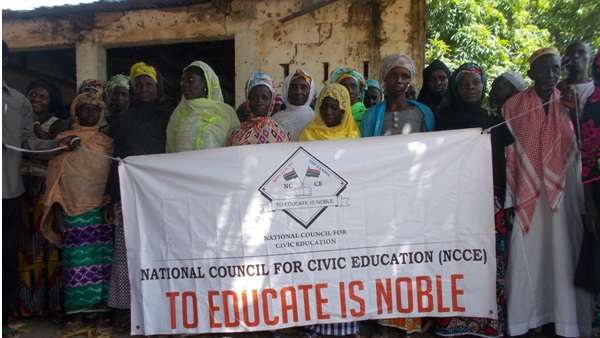 Speaking at the gathering, Lamin Darboe, chief of Kombo South, said such community enlightenment program was what citizens of the country needed.

He urged NCCE to stick to such programs so that citizens will be able to know their constitutional rights.

Yusupha Bojang, programme manager of NCCE, said the Council’s mandate is to sensitise citizens on their civic roles and responsibilities.

“Since the new dispensation, so many things have been happening in the country with regard to citizens,” he said.

In the end, he said it is the Council’s hope that these meetings assist in changing positively people’s attitude and mindset about what democracy really entails.

“We don’t want citizens to see each other as rivals as far as politics is concerned.

They should see each as equal citizens that are all interested in the development of the country,” Bojang noted.

He reminded that no meaningful progress can be registered in the absence of peace and unity.

“That is why anywhere there are misconceptions or an issue that needs to be addressed we take it upon ourselves to go there.”

He spoke at length on the importance of tolerance in a democracy.

“Tolerance is everything! Once people tolerate each other we can be able to live together peacefully but, without tolerance, it will be difficult for us to live peacefully as brothers and sisters of a country,” he said.

Ansumana Yabou, a civic education officer and Gunjur Alkalo were among the speakers.