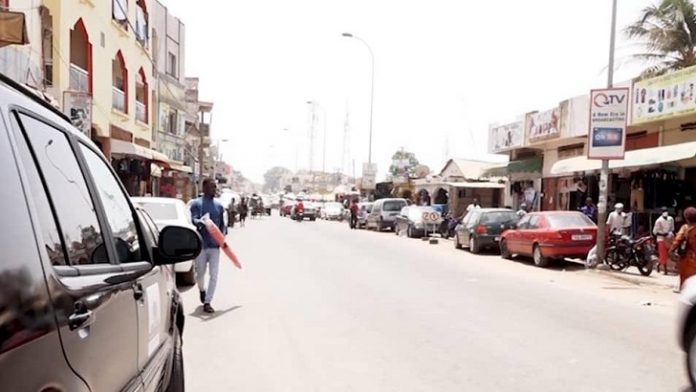 A gloomy outlook indicates that countries around the world shall face steep recession by the time dust begins to settle on the virus pandemic. While concern remain globally with the high rate of infection and the ensuing body count, economic instability continues to preoccupy thought in economists & central bankers around the world
Although it may be quite some time before any clear handle on the level of battering and devastation COVID-19 has had on The Gambia, early warning signs with lockdown worries & social distancing points to a weakening economy.

With no end in sight in the near term, local area councils are extra burdened by saturated small cash collection worries from a hard pressed population quite hesitant to part ways with their few paltry dalasi.

But even amid all the darkening clouds of a little less sunlight from the capital, Banjul, a glimmer of hope still flickers over #RiverGambia, if the Barrow administration are visionary technicians worth their salt. I will come to that!
Anyone dabbled in economic policy and governance will tell you that crisis are nothing new, nor will the latest be the last of them. In a globalised and interconnected world marred by uncertainty, Gambia, get used to crisis decision making and the myriad of challenges it presents to lives and livelihoods.

It is times like these that good leaders and governments rise up to challenge, take the bull by the horn so to speak, inspire and lead their people and nation to big and best outcomes. The name of the game is bold leadership, visible, ever present to rally & lead the way as the nation’s chief patron and spokesman. That is the expectation in a democracy even without a crisis – as seen in Tanzania, Ghana, Rwanda – Macky Sall, even loud mouth Trump’s America – seen busy at it night and day.

Current economic trends in the country does NO justice to the long suffering Gambians nor the state as such per se. Thou one is often encouraged and inspired by the resilience and entrepreneurial drive of young Gambians rising up to unmitigated challengers in a most difficult environment – there is little or no technical/ financial support from their government.

The leadership has a long way to go to catch up and match the desire to rescue and uplift every Gambian child from poverty. That, I’m afraid starts with food security, manufacturing, entrepreneurship start-up nation ready to exploit and export to the world. A desirable state of affairs creating wealth and jobs and riches – requires visionary calibre leaders positioned to direct day-to-day state affairs in the national Interest

So how can Gambia
profit from the crisis?
See – There is no nation state on earth able to navigate its way out of the virus pandemic unscathed. But despite the downsides, political and economic policy decisions of various governments will have a telling forbearance on outcome, or successes to be had later on.
As the number of Coronavirus cases continue to rise in Africa, governments in some countries are taking sharper measures to help poor people affected by lockdowns and social distancing restrictions.

With its strong gold reserves, manufacturing and export trade surpluses, European nations, Japan and those “First World” countries have embarked on quantitative easing measures – printing free cash worth billions, even trillions in the case of the United States, pumped into their respective economies to keep it going.

Nearer to home, BBC Africa is reporting that Rwandan president, Paul Kagame, has said, ‘food is being distributed to the most vulnerable poor across the country. Meanwhile in Kenya, ‘the ministry of agriculture has said it will distribute cereals to the poor …”
The Gambia govt needs to come up with an economic stimulus package as social (security) safety net payments to the poorest families in the country. That to include recovery measures for local businesses through tax incentives on condition that staff layoff will be reversed. By the way, the measures deployed by govt to steady inflation and price gauging at the marketplace are positive, thus welcome.

But these are short term fixes. Long term measures however should see the finance minister hold a press conference allay public concern on the value of the plummeting dalasi in these trying times. He needs to reassure people losing their job and businesses facing closure that incentives are being worked on in terms of taxation, stimulus and that. Information minister Sillah needs to be more visible in the press; Foreign minister Tangara has to come out of hiding and update the country on the status of Gambian immigrants in harm’s way – China, Italy, Spain, et.al.

Devolved area councils too are in dire straits, facing a mini-crisis of their own having to cope with demands to provide services to meet expectations. From Basse, Kaur, Brikama , KMC to Banjul city council – recent sittings of the local govt sub-committee at the National Assembly highlighted some of those challenges.

The administration needs to be ambitious enough – Map out a vision on industrialisation with purposely designated zones in all areas of the country. That means every local area authority must comply with land reserve measures for current agriculture and future needs. Requires the application of technology and knowledge embarking on an architectural design of the entire country’s land layout. Again, central govt has to way, to filter down to local regions enable municipalities to design their own short and long term aims.

Most important, however – in the midst of unreliable global supply chains and food shortages, the administration better rush to localize domestic production on agricultural goods farm supply in an effort to substitute poor quality imports. Gambia has to grow enough of what it eats. This must be the ultimate goal!!!
A Singaporean diplomat once told me its country was willing to stand by The Gambia on the city state ambition. Involves architectural map out of the whole country with resident experts in country, plus town planning. The question has to be asked if the Barrow government is ambitious enough to mobilise on such an unprecedented grand scale? The search for a better Gambia continues – a country that works for all of its citizens.

Never Again: The manifesto of an unlikely candidate