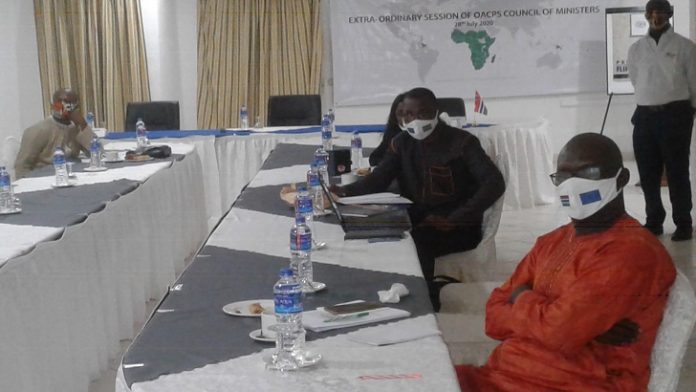 The Organisation of African, Caribbean and Pacific States (OACPS) is a group of countries in Africa, the Caribbean, and the Pacific that was created by the Georgetown Agreement in 1975. Formerly known as African, Caribbean and Pacific Group of States (ACP), the organisation’s main objectives are sustainable development and poverty reduction within its member states, as well as their greater integration into the world’s economy. All of the member states, except Cuba, are signatories to the Cotonou Agreement with the European Union.

The Cotonou Agreement which was signed in Cotonou, Benin in June 2000 is the successor to the Lomé Conventions which was revised in 1995 in Mauritius and gives special attention to island countries in this agreement. One of the major differences from the Lomé Convention is that the partnership is extended to new actors such as civil society, private sector, trade unions and local authorities. These will be involved in consultations and planning of national development strategies, provided with access to financial resources and involved in the implementation of programmes.

This year’s extra-ordinary session of OACPS Council of Ministers was held on the 28th July, 2020 through virtual conference, the first of its kind. The meeting brought about 185 participants from all the member countries. Prior to the session, the Bureau of the OACPS Council of Ministers met on a virtual platform to update member states on the Post –Cotonou negotiations and deliberate on strategic sectors of work of the organisation implemented against the backdrop of an unprecedented global crisis. Both meetings were chaired by His Excellency Mambury Njie, the outgoing president of the Ministerial Council.

In his opening remarks, the Honourable Minister welcomed all the members of the Bureau of the Organisation’s Council of Ministers. In his first statement, he had this to say: “It is a pleasure as well as a great honour to be here with you all today albeit virtually. We are certainly living in extraordinary times. In our modern age, our lives are so inter-connected and our national prosperity depend so much on the movement of goods and services, COVID-19 will have a profound and lasting impact on life as we know it. We are however hopeful that some of the changes will be for the better”.

In his statement regarding members’ contributions, the president reiterated that OACPS Secretariat relies on the solidarity of its Member States by way of payment of their annual contributions for its operations. In this regard, he leveraged on the opportunity to convey the Organisation’s appreciation to the 16 members who have paid their entire contributions to the Secretariat’s Budget for 2020 which represents only 39.68% of the budgeted contributions.

Unfortunately, he said, some 34 members have arrears in contribution for a total amount of Euro 2,376,845 out of which 10 countries are under sanctions for having at least one full year of arrears.

As President of Council, he affirmed that it is his duty to call on those Member States which are yet to settle their assessed contributions to do so at their earliest convenience to ensure the Secretariat is able to fully carry out its mandate. He reminded participants that this year is a crucial one as the Organisation is in the final stages of negotiating a Post-Cotonou Agreement; one that is nowhere close to the previous rounds because the negotiation of a new OACPS-EU partnership Agreement will not be business as usual.

He noted that since the signing of the Cotonou Partnership Agreement in 2000, major changes have taken place. These include new geopolitical realities, globalisation and regionalisation dynamics; a changed European Union with increased membership and the departure of Britain, the emergence of a universal 2030 Agenda for Sustainable Development, the Paris Agreement on Climate Change, which transcends the traditional “North-South” divide and calls for different means of implementation, and a transformed AU.

Minister Njie further adduced that the post-Cotonou negotiations also coincide with the internal EU budgetary cycle and the revision of the EU’s Development Cooperation Financing Instruments that would apply in a post-2020 set-up. All these processes combined pose challenges but also represent a unique opportunity for the OACPS. He outlined the importance of the OACPS to determine its position in relation to other actors and new emerging economies. Through the revision of the Georgetown Agreement, the OACPS has redefined its mission while the European Union remains a major and important partner for the Organisation.

In his words, the Honourable Minister told participants that “the road we are embarking on requires vision and political will. In this ever changing world, we should sustain our faith in each other and maintain and consolidate our bonds of unity and solidarity”. He urged them never to forget the responsibility they are carrying to those generations that have come before them, whose foundation they are now striving to consolidate, and those who will come after them. “We owe it to them not only to maintain the momentum but to take it to a higher level”. He emphasised.

Honourable Njie expressed optimism that a new dawn is breaking and prayed that everyone gets inspired to face the future with renewed vigour, loyalty and dedication to this reinvigorated Organisation. Delightfully, the Chair thanked all for the trust placed in him to chair the session. To him it is a great personal honour, for The Gambia and West Africa at large.

To boost morale further, the Honourable Chair reiterated his confidence in the organisation’s ability to work together and assured that with their cooperation work and discussions will progress efficiently in an atmosphere of mutual understanding. He pledged his availability and that of his delegation and assured all to serve to the best of their abilities.

Finally, he invited all to observe a minute of silence in memory of OACPS dignitaries who passed away recently in Niue, United Republic of Tanzania, Burundi and Côte d’Ivoire as well as all those who succumbed to the deadly corona virus. He prayed that their souls rest in peace.