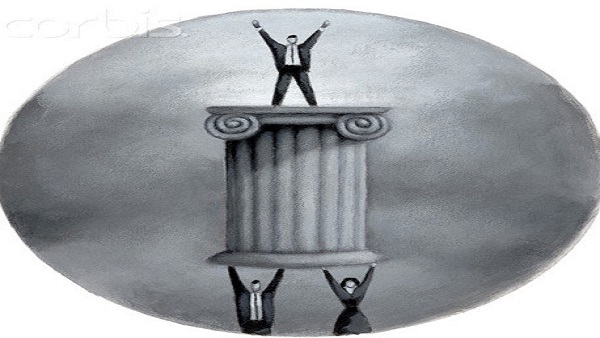 Definition of personality cult:a situation in which a public figure (such as a political leader) is deliberately presented to the people of a country as a great person who should be admired and loved.

A political party is based on its ideology, or perhaps I ought to write SHOULD be based on its ideology. A leader of a party can and will be replaced sooner or later, but the ideology still stands firm. What I have noticed in The Gambia is that mostly a party is based on the one who registered the party. There have been several parties in The Gambia and so many of them don’t exist anymore. When the leader stepped down, or is deceased, the party vapourises into the mists of forgetfulness.

The ideology wasn’t strong enough to remain as a foundation of future work for that party. Instead it was built on one man alone and the ones he managed to persuade to vote for him. If the ideology of that party had been good and strong enough, it would have been possible for someone else to take over the leadership and continue the good work. The problem is that we have plenty of self-pronounced leaders, who even believe they are capable of becoming presidents, but do they really have the capacity for that? We have another problem, as I see it, and that is we still vote based on the relation we have with the candidate. It’s not easy to NOT have a relation to any candidate in The Gambia, considering the size of the country, but we need to stop looking at tribe, family and friendship.

We need to focus on the common good; what good the candidate can do for the whole country – not only his family and his village.
Pondering this I will share a quote from The Standard newspaper some days ago. The quote is taken from a speech by President Barrow at the graduation ceremony at the UTG.
“As law-abiding citizens, it is obligatory for all of us to reject divisive politics, and put the interest of The Gambia first. No citizen should allow our political or religious differences to corrupt our judgement, and derail the march to prosperity and a better and peaceful Gambia,” he said.

This is meant as advice to the youth, to the future of The Gambia, to our future leaders and presidential candidates. Good words indeed, but they sound hollow in my ears.
Telling the youth to put the interest of The Gambia first could be a genuine advice if it would have come from someone else but President Barrow. Considering his actions this far, his interest has not been the welfare of The Gambia. It is hard to take him seriously when we all know where his first and uttermost interests lay. To continue quoting President Barrow: “No citizen should allow our political or religious differences to corrupt our judgement, and derail the march to prosperity and a better and peaceful Gambia.”
Is President Barrow really the right person to speak out about corruption, no matter what kind? When he came to power he was supposed to lead a coalition government. To be able to do that a person needs leadership skills and a mind of a diplomat.

A modern president must have a wide perspective, he must be able to listen to the opinions of others – even of those he doesn’t like. Personal opinions, fellowships or grudges must be left behind, the country comes first. Has anyone of us truly felt that this is the case with our current president? Those of you who have something to benefit from his position are answering yes to my question, but I doubt that you are the ones who read my column.

It didn’t take long until we could notice that President Barrow liked the idea of himself as a president. The position comes with a lot of benefits and the boring tasks can be done by others. A leader who lacks leadership skills becomes led by others. One pulls him to the left, another to the right. More come from all directions until the president’s head begins to spin. He didn’t see them coming and when he found out it was too late. We shouldn’t put all the blame on President Barrow as he was chosen by a group of people. It would have been amazing to be a fly on the wall, listening to their discussion about suitable candidates. I wonder which criteria they used. Desperate times call for desperate measures, is the saying, and it has never been more true than the time before election 2016.

Didn’t anyone consider all the tasks a president has? A president must have a great knowledge in so many areas, and he must pick the best advisers to keep him on the right track. These advisers should not be his best buddies or other back-patters, instead they must be honest and able to stand firm even when their advice is less popular.

A president with a coalition government faces great challenges every day because every party comes with its agenda. The president must be able to listen, ponder and pick out the best parts from every party. He must lead his government with a firm hand and an open mind. The position of presidency requires respect, but the respect must be mutual. No one can force anyone else to respect him or her, respect is earned. A leader can never agree with everything the representatives of a certain party say, but he can show respect by
listening to them.

Political decisions are based on research and extensive discussions. Some people find it boring and would prefer a shorter way to the decision, but we must look at it as a process. We must allow the process to take time, a forced decision can even be fatal. It would be different if the decision-making was at a small scale, but when we speak about decisions that concern a whole nation, we need to calm down and think first.
“…derail the march to prosperity and a better and peaceful Gambia.”

Well, who is better to lead us in the march to prosperity than President Barrow? This is what happens when we put a businessman as a leader of the country. Every businessman has the same motto and that is: “What’s in it for me?” President Barrow appears in public like a Hollywood movie character. This character is a car salesman, a street-smart guy, not educated and can sell any kind of wreck to people who have no clue who they are dealing with. He knows all the tricks in the book and is prepared to make any kind of deal, as long as it benefits him and him alone. Imagine President Barrow in an ill-fitted suit, an ugly hat and a cigar – there you have it! This kind of person has nothing much to offer, people surround him as long as it benefits them but when the money is gone – they are gone. So, the issue with Barrow leading us in the march to prosperity is that it doesn’t benefit anyone else but him.

President Barrow refused to keep his word and step down after three years. Time after time, he said that it was up to the people to decide whether he should stay or not. When time had come, and the Three Years Jotna movement spoke out what so many of us thought, there was no room for democracy anymore. So many of us suspect foul play behind what happened at the demonstration in January. The Three Years Jotna movement had no ill intentions, it was a matter of making a statement and nothing else.

Let us listen to some more from the president’s speech:“In the quest to nurture and sustain peace in the New Gambia, we have adopted measures to strengthen the rule of law, social cohesion, respect for human rights, good governance, dialogue and mediation, justice, sustainable development and national reconciliation.
The Gambian leader said: “It is mandatory upon all peace-loving citizens to be civil and disciplined, and to exhibit peaceful dispositions both in their relationships with other citizens and the state.”

What are the ”measures to strengthen the rule of law”? More teargas guns, the purchasing of a water cannon? Are the citizens of The Gambia that dangerous so you need to be controlled with heavy armoury? Is it a plea to “all peace-loving citizens” or a threat that you should be civil and disciplined? I don’t believe that common citizens of The Gambia have ill intentions, but the problem is that the harder someone tries to control you, the harder you fight back for your freedom.