Commentary: Why is Lamin Jallow out in the cold at Salernitana? 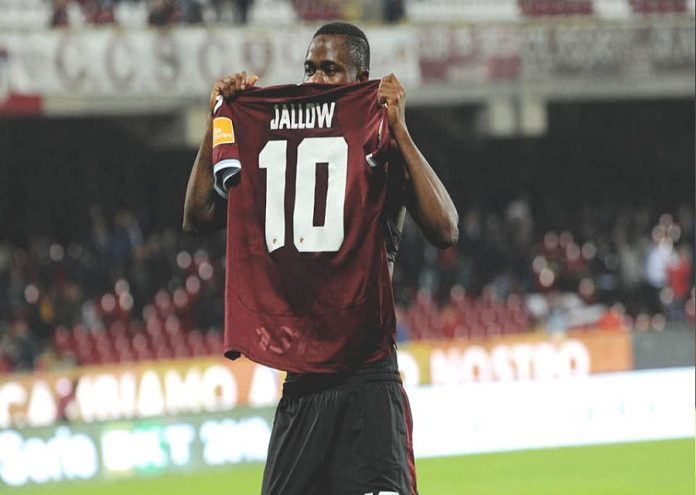 Lamin Jallow’s lack of games at Salernitana continues. He was again used as a substitute in his team’s 1-0 win over Trapani on Monday night.

The Gambian forward, who has had a decent spell in the first half of the 2019/20 Serie B season, scoring 6 goals in 13 games, has been struggling for a place in Gian Piero Ventura’s team since the restart of the season following the winter break.
The last time the 24-year-old winger took part in a game was a 10 minute appearance in the 4-0 drubbing of Pordernone on December 26 when he came in the 81st minute to replace Bosnian forward Milan Djuric.

He has since not featured for the Salerno side, which must be a real concern to The Gambia’s coach Tom Saintfeit and of course the Scorpion fans ahead of the team’s preparation for the two-legged tie with Gabon in the space of four days next month.

It is unclear why all of a sudden the winger nicknamed Beck is being kept out in the cold, despite having had a decent showing in the first half of the season with a healthy goal return, which had attracted few club’s to seek for his services in the January window, including Serie A club SS Lazio, who had been linked with him through out the window. He was also heavily linked to Egyptian top tier side, Al Ahly, who were reported to have even tabled a bid in the region of €5 million for the winger, which would’ve also seen him earn a reportedEu700,000. That deal not go through as the money fell way short of his team’s valuation of the talented Gambian international, and that, coupled with Jallow’s reported reluctance to move to Cairo stopped the deal from going through.

Other Serie B sides Cemonese and Pescara were also reportedly keen on the former Chievo player and his Gambian teammate, Hamza Barry’s Hajduk Spilt were also reported to have shown interest in the star player
There are other reports that his frosty relation with the club of late could be down to his recent hand gesture aimed at the club fans during the Granata’s 3-2 win against ten-man Crotone, where the Gambian forward scored a 64th minute equaliser to kick start Saler’s comeback from a goal down after conceding in the 14th minute.

During that match Jallow ran towards his club fans after scoring and placed his finger to his lip, signalling for them to shut up, for which he later apologised saying the gesture was in fact directed at a single fan who has been regularly abusing him, insulting his family and all, and in the end his emotions got the better of him. He was later pulled away by the team’s officials but his behaviour did not go down well with the club’s hierarchy and ever since the incident his participation in the team has diminished.
Whether this has any bearings on his current predicament or whether it’s just coincidence remains to be seen.

However, he started in all 6 of the 7 games prior to the game in question and had only featured once since, which was the 10 minutes’ cameo run against Pordertone on December 26th.

Whatever, the case, Gambians hope he has his chance before the crucial double header against Gabon as he is a key member of the squad and of course an integral part of the team’s set-up especially away from home, where his pace can be useful on the break.