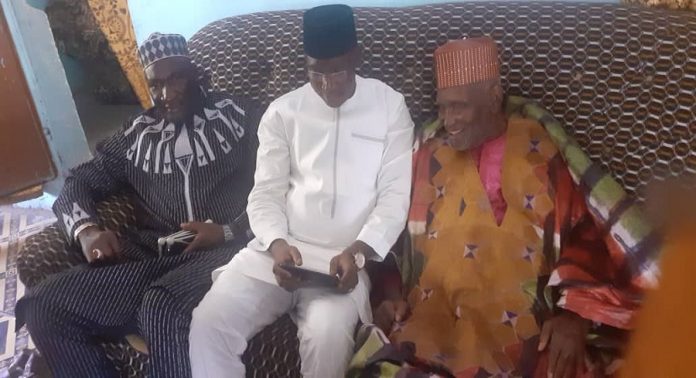 Drama unfolded in Basori village Sunday when the much-respected Darboe Kunda Majilis house had their Eid prayer interrupted by security forces intending to enforce the emergency regulations, which ban congregational prayers to contain the spread of the coronavirus.

An amateur video footage viewed by The Standard showed members of the congregation scattering and milling around the Imam, Sheikh Yakub Darboe, brother of the Caliph general Sheikh Munir Darboe. The crowd was heard complaining about the presence of the security. A police officer was seen trying to politely explain to the Imam about the emergency regulations. The Imam was seen escorted by a large crowd entering a house.

According to eye witnesses the Caliph, Sheikh Munirr Darboe a famous and widely respected marabout, had directed that Eid prayers be held only for his family and disciples in the family compound. However, because of his standing and followership in the society, other people flooded the compound to pray with his family and disciples. Our source quoting one of his disciples, said: “The man leading the prayers was Sheikh Yakub Darboe who naturally could not send away worshippers. So at some point security officers arrived and their very presence led to an immediate commotion leading to the total disruption of the Eid prayers.”

Our sources praised the security for being very respectful and professional in handling the situation and explaining the need to protect the people from catching the coronavirus through public gatherings.
Meanwhile, our source went on to say that soon after the standoff in the marabout house, the security officers who seemed to be waiting for further instructions, suddenly withdrew from the scene.

A little while later, our source went on, a delegation arrived comprising the director general of the State Intelligence Services, Ousman Sowe and Musa Suso, deputy Governor of the West Coast Region.

According to our sources, the two men met another elderly member of the family, Alhaji Yusupha Darboe and other disciples and were able to successfully defray all tension and explained the matter to him and apologised for any inconvenience that was not intended.
Our source said the delegation assured the Majilis house of the highest respect of President Barrow.

The Standard contacted Musa Suso who confirmed their visit to the Majilis and happily reported that the matter has been resolved. The Alkalo of the village was also heard in an audio explaining that the confusion has been settled and there is no misunderstanding between the people of Basori and President Barrow. However other audios emerged from the village and beyond condemning the treatment meted out to the Majilis describing it as an attack on the Majaalis in The Gambia who have contributed to the President’s enthronement.

Meanwhile, The Standard understood that a similar incident happened in Brusubi where Imam Lamin Suwaneh, son of  Karamba Suwaneh of Madina Suwaneh in Casamance was arrested and later released.
The deputy governor of West Coast Musa Suso also visited Brusubi to calm the situation there too.

Both Mr Suso and the Imam, Lamin Suwaneh spoke to The Standard from Brusubi, assuring the nation and the followers of Madina Suwaneh Kunda Majilis that the matter has been resolved. The Imam said he has no grudge or anger and had forgiven everyone for what happened and thanked Musa Suso, Sheriff Taball and others for mediating in the matter.

“I have always loved The Gambia and will not do anything outside the law. All what we did was to pray with our Talibes in our own compound and even before this, each time we pray we close all our doors to avoid other worshippers joining us”, Imam Lamin Suwaneh said.

The Standard contacted the public relations officer of police, ASP Lamin Njie, who said: “The police received a tip off about congregational prayers in Basori but when the patrol team visited both the praying ground and the mosque, they found that not to be the case as no one was found at both places. However, on their way back the patrol team got information that the Imam is leading prayers and when they got there, they found that the Imam was leading prayers in his compound and the patrol team just sensitized them on the emergency regulations and left.”

At Brusubi, the police PRO said the Imam there was arrested because he was found leading congregational prayers.
Enforcement of the ban on congregational prayers has proven quite controversial so far with three Imams convicted for violating the regulations. The incidents in Basori and Brusubi have proven to be a test case for the authorities with many questioning why the special treatment and apologies when others have been taken to court.