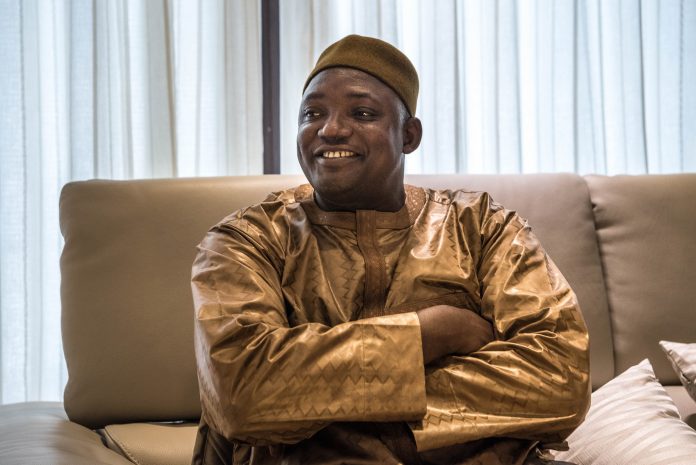 In the wake of last Monday’s inferno that ravaged a significant part of the Basse Market, Upper River Region, causing the loss of merchandise valued at millions of dalasis, President Adama Barrow on Thursday, presented cash donations to Governor Fanta Bojang-Manneh in the amount of two million dalasis ($40,000).

A press statement issued by government spokesperson Ebrima Sankareh read: “The presidential largesse is for the distraught fire victims most of whom were rendered poor by the inferno that lasted several hours despite the combined efforts of various fire fighters within the Central and Upper River Regions.

“In a sombre statement, President Barrow appealed to Gambians, members of the business community and humanitarian organisations to generously come to the rescue of the fire victims most of whom have been ripped off of their lifetime earnings within hours.

“President Barrow who lived in Basse during his formation years recalled with great nostalgia, the significant role the town and its people contributed to his personal development. The two million dalasis I donated are from my personal funds, they are neither the government nor my party’s and therefore, it should not be politicised’, Mr Barrow cautioned.

“Mr Barrow promised that in the near future, his government will construct a modern market equipped with all the fire hydrants and exit routes to replace the burnt and dilapidated structures of the old market…”

By Bruce Asemota Justice Ebrima Ba Jaiteh of the High Court in Banjul has ordered that Dodou Bojang, the current alkalo of Bakau, be served...
Read more
News

By Omar Bah In the wake of the recent attacks and counter-attacks among some members of the country's political leaders, veteran and former politicians have...
Read more
- Advertisment -

Who should and who shouldn’t be interviewed by journalists? The...

January 26, 2021
By Famara Fofana There is no gainsaying that the Gambian media has seen it all in in the recent past. Not only were disappearances of...