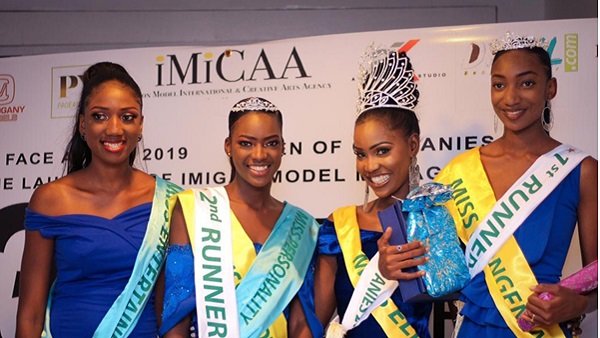 The seventh edition of the Queen of companies’ annual pageant displaying beauty and elegance of business organisations was staged last Friday, at a colourful ceremony in Senegambia.

Queen of companies is a beauty pageant initiated some seven years ago, to promote businesses and services in the country.

The night witnessed another event, Face Africa – an international modeling competition, and the launching of IMICAA Model Management Agency.

Her platform was based on climate change, representing The Gambia.

Her platform was based on food security, and she represented Nigeria.

Her platform was based on entrepreneurship and development, representing Guinea Conakry with Rose Vida Yawson of Artistik Studio Gambia scooping the 3rd runner-up award.

Her platform was based on suicide and she represented Ghana.

Best traditional wear goes to Laila Drammeh of ILink Technology Gambia. Her platform was based on importance of technology, representing Kenya.

The event was the brainchild of William Brown of IMICAA Model Management Agency.

Also the director of Icon Model International and Creative Arts Agency, Brown said great strides have been made since the commencement of these events, which he said has gained recognition of international partners helping to expose their models to international standards.

“The platform creates awareness for people and it was also designed to promote some of the companies that most people don’t know about,” he told The Standard.

He said the agency also organises events such as fashion shows, beauty pageants and even send models to international events in Africa and in Europe.

He urged the young models to be patient, and to remain determined in their endeavours, telling them to become an international model “you have to be educated and smart”.

“Congratulations to each and every one of you companies who participated from all of us at IMICAA Model Management Agency,” a joyous Brown said.

Ali Wally, coordinator of the Agency, said modelling is about “not only the runway or catwalk”,
“It is about being intelligent, smart, and knowing how to comport yourself,” he said.

The 2019 winner of Queen of Companies, expressed delight for being crowned winner of this year’s pageant.

She received a plot of land said to worth over D300,000 given by Gam Housing Estate.

“I contested in this pageantry to make a difference, to stand and to talk to people about the problems affecting our businesses.

I thought the only way to do that was to participate in this event,” Miss Cham said.

OB MIKE REVEALS LITERATURE WAS THE FIRE-STARTER FOR HIS MUSIC OB Mike, an upcoming Gambian artist, said Literature in English sparked the fire in his...
Read more
Entertainment

MEN KNEW WE ARE STRONG PILLARS. -Flex Fuzion entertainment director As this month is dedicated to women, I will continue to celebrate all queens out...
Read more
- Advertisment -