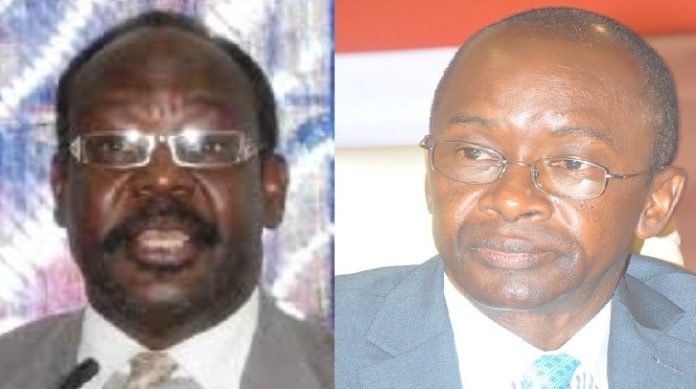 As at now, Gambian Criminal Law, is not extra-territorial. This means that, if an alleged external Offender allegedly commits a Crime under Gambian Criminal Law outside Gambian territory, he or she cannot be tried for that alleged Crime, because our Gambian Courts will lack jurisdiction to try him or her for that alleged Criminal Offence, since it has not been allegedly committed, within Gambian territory.

Since The Constitutional Review Commission (C.R.C.), recently released our long awaited Draft 2019 National Constitution to both The Gambia Government and the general Gambian and non-Gambian populations, a lot of heated or ferocious debates have emerged, from both Gambians and non-Gambians in The Gambia, and from Gambians and non-Gambians in the Diaspora, concerning The C.R.C.’s intentional and totally unacceptable omission, of the very important word “Secular”, from Section 1 of our 2019 Draft Constitution. Some unpatriotic and Legally and Constitutionally bankrupt Gambians in the Diaspora ,especially on social media , notable among them, DR. Omar Jah and others, have done a lot of disservice to The Gambia, by intentionally and maliciously distorting, the positive meaning of the very important word “Secular”.

My critical legal analysis of our 2019 draft constitution
On Friday 13th December 2019, two days before the expiration of the first extended deadline, for members of the general public, to send their comments and suggestions on the 2019 Draft Constitution, to The C.R.C.. I personally delivered my critical comments that were done “uberrima fide” ( Latin i.e. in utmost good faith), to a reliable and trustworthy male Officer of The C.R.C., who was kind and gracious enough, to sign my Way Book, as an irrefutable evidence, that my important letter, addressed to Justice Cherno Jallow , was in fact received by The C.R.C.. It was rather unfortunate, that the very important recommendations, that were made by The Gambia Christian Council (G.C.C.), which were encapsulated in The G.C.C.’s First Position Paper, which was submitted to The C.R.C., were not incorporated in The 2019 Draft Constitution, because The C.R.C. interestingly said, it was unable to trace the aforesaid important legal document. “Once beaten, twice shy”, as the famous adage goes.

I started my 19 pages critical legal analysis of our 2019 Draft Constitution, by alluding to my timely legal article titled :- “C.R.C. Members woefully, illegally and unconstitutionally, failed to insert “Secular” in Section 1 of our new draft Constitution.”, which I duly published, in the Friday 22nd November 2019 publications, of both The Standard Newspaper and The Voice Newspaper respectively. I in fact correctly wrote: – “… The present generation of Gambian and non -Gambian Christians, have no problem whatsoever, with His Excellency President Adama Barrow, because he does not have, an iota of the negative and unacceptable propensity, to unconstitutionally declare The Republic Of The Gambia, as a so called “Islamic State.” He is a very liberal and broad-minded Muslim President. Our real worry is the future Gambian President after him, who may have the aforesaid undesirable and unwarranted propensity, like ex-President Yahya Jammeh”. The C.R.C. Members should be commended for giving the general public a second deadline, which expires on 31st December 2019, since to analyze effectively the said Draft, is indeed a herculean legal task.

Justice Cherno Jallow’s argument why he and CRC members omitted “secular” from section 1 of the draft constitution
The argument adduced by Justice Cherno Jallow, in The Standard Newspaper (which my aforesaid published legal article, was a fitting reply to), “does not hold any water” (i.e. not a valid and logical argument). His purported defence was :- The Gambia’s 1970 Republican Constitution’s Section 1 only said :- “The Gambia is a Sovereign Republic”, and the word “Secular” in our present 1997 Constitution, was illegally inserted there, by the then Attorney General & Minister Of Justice, Mr. Joseph Henry Joof. When Honourable Mr. Kemesseng Jammeh (M.P.), challenged him about this, and filed his Case in The Gambia Supreme Court, (evoking the original Constitutional Jurisdiction of that Court, to interpret The Constitution), the present Honourable and Learned Gambian Lord Chief Justice, Mr. Hassan B. Jallow (C.R.G), was the only Judge, who ably handled this Case. He rightly decided that the aforesaid insertion in Section 1 of our present 1997 Constitution was unconstitutional, because it was an entrenched Clause. Therefore for it to be properly amended, The I.E.C. should have mandatorily and Constitutionally conducted a Referendum on the matter, but this was never done. All of this is now Constitutional past tense. This is the same illegal and unacceptable opinion of both DR. Omar Jah (an ex Deputy Vice Chancellor (V.C.) of The University of The Gambia, now a Deputy V.C. of a Bangladesh University), and his old diplomatic uncle (a Gambian Ambassador Emeritus), Professor Jah Senior. I do hope that these two Gambian Muslim men did not instigate or incite both Justice Cherno Jallow and his C.R.C. colleagues, when they were drafting our 2019 Draft Constitution? Or was this ”a telepathy” (i.e. corresponding thoughts in two independent minds?). If the answer to this important legal question is “Yes”, then Professor Jah Senior, can rightly be arrested by The Gambia police, and correctly Charged with the inchoate or incomplete Criminal Offence called :- “Incitement”, under The Common Law. But DR. Omar Jah cannot be arrested by the police and Charged, with the aforesaid Offence, because when he allegedly committed it, he was outside the territory of The Gambia, probably in Bangladesh, where he is now working. Therefore Gambian Courts will lack jurisdiction to try him. Professor Jah Senior, can also be rightly Charged, for “Conspiring with DR. Omar Jah, to incite C.R.C. Members”, if the answer to the aforesaid legal question was “Yes”.

Now that The C.R.C. Members have the golden opportunity, to justifiably insert “Secular” in our 2019 Draft Constitution, why on earth they never seized the Legal/Constitutional opportunity to do so? “Actions speak louder than words”, “Strike while the iron rod is hot”, as two appropriate adages go. Justice Jallow’s and the two Mr. Jahs argument, is a bad argument. If they are now telling Gambians, The C.R.C. Members decided to omit “Secular” from the draft, because it was never there in our 1970 Republican Constitution, and it was illegally/ unconstitutionally inserted in our present 1997 Constitution in 2001, therefore it should now not be there, this is highly illogical and totally unacceptable. If that is the Case, then there will be no need whatsoever, to amend our present 1997 Constitution Mutatis Mutandis (Latin: – with the necessary changes or amendments).Gambian Christians and liberal Gambian Muslims, both in and out of The Gambia, legitimately and justifiable want “Secular” to be rightly inserted, because of inter alia two bad past experiences, Gambian Christians experienced during ex-President Yahya Jammeh’s dictatorial era namely :- (1) the 2003 controversial Religious Veil controversy at a Gambian Christian School (i.e. St. Therese’s School at Kairaba Avenue), and (2) when ex-President Yahya Jammeh, unconstitutionally declared The Republic Of The Gambia, as a so called “Islamic State”, without a referendum, as required by the present Constitution, on 12th December 2015, thereby and unacceptably making Gambian Christians , second class Citizens .

The unanimous, learned and incontrovertible legal opinion of the Gambia Bar Association
I am happy to highlight the fact that, The Gambia Bar Association (G.B.A.), our National Association Of Lawyers, who are very learned in The Law, met recently on this matter, and it was unanimously decided, by both Christian and Muslim Lawyers, that with the preponderance of evidence, ex debito justitia (Latin:- as of right), ” Secular ” should be inserted, either in The Preamble or in Section 1 of the 2019 Draft Constitution. The laconic phrase “Sovereign State”, in Jus Gentium (Latin:- The Law Of Nations or Public International Law), does not in any way protect “Right to Religion.” Google authoritatively defines this as: – “A State with a defined territory, that administers its own Government, and is not subject to or dependent on another power.”. All of the four Gambian Lawyers, who are Members Of The C.R.C., are also bona fide Members Of The G.B.A. namely:-
Ø Mrs. Hawa Kuru Sisay-Sabally, B.L., Vice Chairperson Of The C.R.C.,
Ø Mrs. Janet Sallah-Njie- B.L.-Member
Ø Mr. Gaye Sowe, B.L. My Learned Junior – Member and
Ø Mr. Lamin S. Camara., My Learned Junior – Member.
As a Senior Canadian-Trained Theologian, let me say, The Holy Bible in the book of Proverbs Chapter 11, Verse14 states, “Where there is no counsel, the people fall; but in the multitude of counselors, there is safety.” Google authoritatively explains this to mean:-The wisdom of godly advisers, can help steer us in the right direction. In other words :- “Great minds think alike”, as the adage goes. In Latin we say:- “Consensus ad idem” (i.e. a meeting or convergence of minds). Justice Cherno Jallow’s name, is also still on the list of Gambian Lawyers, even though, he is now a sitting Supreme Court Judge. “A journey of a thousand miles, begins with a single step.”, as the adage goes.

Executive (Chapter V111)
Section 91(1)(F) of this important Chapter of the draft reads :- “Subject to Section 92, a person is qualified for election as President if he/she :- (F) holds a minimum of an Undergraduate Degree plus five year’s work experience after the date of attaining that Degree …” I was asked a question, pertaining to this important matter, by Mr. Benjanin Roberts, the host of The QTV Business And Economy TV Program, on Saturday 23rd November 2019, which is now on YouTube , and my answer was as follows:- DR. Carrol’s answer:- “Mr. Roberts, I honestly do not think, that a Presidential Candidate, must have “an undergraduate degree”, before he/she can be qualified to be a Presidential Candidate in The Gambia, because according to the authoritative definition of “ Democracy”, laid down by the late and veteran American President, My Learned Friend, Mr. Abraham Lincoln, a distinguished American Statesman and Lawyer, who served as the 16th President of The United States, from March 1861 until his assassination in April 1865, he said:- “Democracy, is a government of the people, by the people, for the people.” Therefore, if we restrict access to The Gambian Presidency, this will be undemocratic, a flagrant violation of Constitutional Political Rights of many Gambians, who will be disenfranchised, and this will also be a blatant “Discrimination”, contrary to Section 33 of our present Constitution. I strongly believe, that our 2019 Draft Constitution, also contains, a general anti-discrimination Clause.

Finally, the laconic phrase: “plus five years’ work experience after the date of attaining that degree….” is also unfair. For example before in The Gambia Civil Service, one should inter alia have 3 years work experience, and pass a medical examination, before he/she can be confirmed to be “ on the permanent and pensionable establishment.” But this notwithstanding, in exceptional circumstances, they also had “Accelerated confirmation”, for employees who performed very well, with a minimum of 2 years services. Presently under Order 02110, an employee should only serve for 1 year, before confirmation. Therefore, we must be flexible, and The Gambian Presidency (the highest Office in the land), must not be an exception to this sacrosanct and inviolable principle, I rest my Case.”