Reaction to the CRC draft constitution 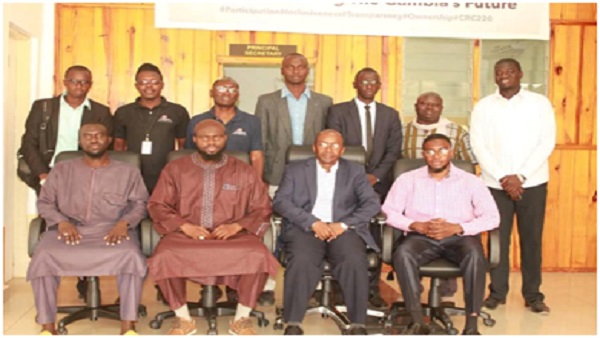 Dear esteemed readership, it is important to first tell you who we are. Concerned Citizens first came together as a group to discuss and collectively present opinions and viewpoints of Muslims in the drafting of a new Constitution for The Gambia. Towards this end, Concerned Citizen organized on Saturday the 29th December 2018 a participatory open forum for all Muslims to discuss the CRC Issues Document. The unique achievement of this forum was that it brought together and enlisted the proactive participation of representatives from various Muslim groups and associations throughout the country. An important output of the Concerned Citizens’ forum on the drafting of a new Constitution was the development of the Concerned Citizens Muslim Position Paper which was submitted to the CRC on Monday the 31st December 2018.

Concerned Citizens is now a registered Social Development Enterprise engaged in various socio-economic and cultural development activities for the betterment of The Gambia and Gambians. Concerned Citizens has a large membership and following spreading far and wide in the country and abroad. At this juncture, it is important for Concerned Citizens to clarify its position that it does not support, is not involved with and has no business whatsoever in any activity, past, present and in future with the movement of 3 years jotna.

This disclaimer is due to the fact that there certain letters were circulated in the social media, wherein a group calling themselves Concerned Citizens were requesting for police permit to organize rallies and programs relating to the issue of 3 years jotna.

In a submission letter to the CRC underlining salient observations on the recently published Draft Constitution, Concerned Citizens congratulated and applauded the CRC for their good work in presenting a draft Constitution on time according to their initial implementation calendar, and there are indications that the draft Constitution indeed reflects the opinions and aspirations of majority Gambians at home and abroad. Concerned Citizens in this same letter highlighted that the CRC consultative processes have indeed been participatory, inclusive and transparent. The CRC endeavoured to give all Gambians the opportunity through multiple platforms to express their views in the Constitutional Review and Building process. The CRC through print and electronic media, have been constantly engaging and informing Gambians with regards to the implementation of their programs and activities. Concerned Citizens reaction to the Draft Constitution underscored the following:

However, Concerned Citizens noted that Islamic Wills (and gifts) still remain unattended in the CRC Draft Constitution in view of the jurisdiction of the Shari’ah Court. According to Section 30 (1) of the Wills Act, Vol. 4 CAP 14:06, 2009, states that; “A Will made by a person whose personal law is Sharia Law shall be construed in accordance with Sharia Law”. Therefore, considering that majority of Gambians are Muslims, and that the construction of their Wills is subject to their personal law which is Sharia Law, it is more so prudent and justified for the Shari’ah Court to be also duly accorded jurisdiction to preside over all matters dealing with Islamic Wills (and gifts).

3. Composition of Judges in the Court of Appeal and Supreme Court
According to Sections 180 (1) (b), and 174 (1) (b); highlighting the composition of the Court of Appeal and Supreme, it is understood that at least one of the Judges constituting these courts, must be Shari’ah qualified. However Concerned Citizens noted that in the event a panel is presiding over Shari’ah matters wherein all panellists except one are non-Shari’ah qualified, then decisions or votes from panellists could be prejudiced towards the majority who are non-Shari’ah qualified. Thus, in order to prevent and or mitigate against such possibility, Concern Citizens enjoined the CRC to consider and endeavour to put in place adequate constitutional safeguards which would ensure that processes and decisions resulting thereof are fairly dealt with.

4. Culture & Marriage
Section 11 (1) of the Draft Constitution under Culture, it is explicitly stated that: “This Constitution recognizes culture as the foundation of the nation and as the cumulative civilization of the Gambian people and nation”. For Gambians, marriage is sacred and inextricably linked to our culture. After birth and its accompanying cultural celebrations of a naming ceremony, the second stage in life with perhaps the largest and most celebrated cultural ambience, is marriage. Therefore the issue of marriage is very important to Gambians and should not be trivialized. Concerned Citizens noted that in Senegal, with whom The Gambia shares close cultural ties, values and heritage; according to Article 111 of the Senegalese Family Code of 1989, the contract of marriage is clearly defined, stating that; “marriage shall not be entered into except between a man of 18 years and above, and a woman of 16 years and above …”. The Senegalese Family Code is a relevant anti-discrimination provision which is still in force.

Section 52 (1) of the CRC Draft Constitution describes the right to marriage as; “Men and women of full age and capacity have the right to marry and found and family”. Sub-section (2) of the same Section states that; “Marriage shall be based on the free and full consent of the intended parties”. The above provisions when read together, do not give a clear definition as per the contract of marriage and the specific parties involved. The last two words of “intended parties” in the Sub-section (2) mentioned above, dangerously opens up the issue of contracting parties to multiple interpretations, wherein the issue of gay or LGBT marriage could be implied from the said provision. In view of this, Concerned Citizens proposed that marriage should be clearly defined in the new Constitution, in simple and unambiguous terms. Also, given the rise in the promotion of the transgender narrative, and cognizant of the fact that the CRC is engaged in the development of a Constitution on behalf of Gambians that will stand the test of time, marriage should be clearly defined in the new Constitution as a contract between a biological man and a biological woman, consistent with the Gambia’s socio-cultural norms, practices and values, which is part of the foundation of the nation and the cumulative civilization of the Gambian people and nation.

Furthermore, Concerned Citizens underlined that homosexuality is criminalized in The Gambia’s Criminal Code. The current Draft Criminal Offences Bill of 2019 reflects the same position with regards to homosexuality and other unnatural offences. This clearly shows that the past, current and future trajectory of the Gambia and its people, does not and will not condone same-sex marriage. Therefore, the new Constitution should also and clearly mirror the same in order to be truly reflective of the will, views and aspirations of the Gambian people.

5. Marginalized Groups
Section 242 of the Draft Constitution establishes a Development Fund “into which shall be into which shall be paid five per cent of all the revenue collected by the Government each year calculated on the basis of the most recent audited accounts of revenue received, as approved by the National Assembly”. The Draft Constitution also in this same Section empowers and defines the limit to which Government shall use the Development Fund for the benefits of marginalized groups and disadvantaged areas. Concerned Citizens also noted that Section 82 (2) (e), states that every political party shall “respect the right of all persons to participate in the political process, including women, youth, persons with disabilities, and other marginalised groups”. Concerned Citizens noted that in the view of the above, and since marginalized groups have been rightly accorded due recognition in the CRC Draft Constitution and allocated a significant portion of government revenue for development purposes, marginalised groups should therefore be clearly defined in the new Constitution and not left unclear or subject to multiple interpretations (i.e. and other marginalized groups). Concerned Citizens maintains that any definition of marginalised groups, in view of the Gambia’s cultural values, practices and norms as already described above, does not include the LGBT community.