Remarks by H.E. Ma Jianchun, Chinese Ambassador to The Gambia 70th Anniversary of the Founding of the People’s Republic of China 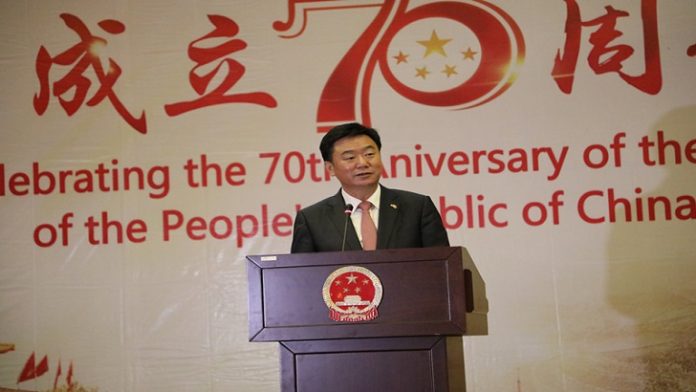 It is an honor and great pleasure for me and my wife to welcome you all this evening to this event, to celebrate the 70th anniversary of the founding of the People’s Republic of China.

I would like to express our deep appreciation and heartfelt thanks for your attendance, and to all those who rendered support to the Chinese Embassy and the friendly cooperation between China and The Gambia.

70 years ago, on 1 October, the People’s Republic of China was founded after over a century-long arduous struggle by the Chinese people.

41 years ago, China started the historical journey of reform and opening-up.

China’s GDP has increased by more than 450 times, from 30 billion dollars in the early years of New China to more than 13.6 trillion dollars in 2018. China is now the world’s second largest economy, largest industrial country, largest trader in goods, biggest holder of foreign exchange reserves.

China has been the second biggest destination of foreign investment for two years. China has set up the largest social security network for the largest population.

Now, we boast the world’s largest population of middle income. Over the past 40 years, we have lifted 740 million people out of poverty.

By the year of 2020, we will completely make poverty history. Moreover, China is contributing over 30% to global growth. China has been acting as a key driver for economic growth and a major force for peace and development of the world.

Although China achieved these progress in the past 70 years, China’s basic national conditions and status as the most populous developing country will not change. Development as China’s top priority will not change.

China is committed to the path of peaceful development and the building of a community with a shared future for mankind. China calls for jointly building a new type of international relations featuring win-win cooperation and partnership.

To strengthen cooperation and solidarity with developing countries continues to be the staunch strategic priority for our diplomacy. This is determined by what defines China as a country, and by the system and values which China upholds.

No matter how much China grows in strength, and how the international landscape evolves, this strategic priority will remain unchanged.

The Principle has been fully implemented and has ensured prosperity and stability in Hong Kong and Macau since the handover.

The initiation of the extradition law amendment and the decision to halt the legislative process in response to public opinion in Hong Kong are both reflections of the Principle.

The central government of China will stay true to “one country, two systems” principle, and make sure that it is fully applied in Hong Kong without distortion. Hong Kong affairs are purely China’s internal affairs which brook no interference from any country, organization or individual.

Hon. Speaker, Hon. Ministers, ladies and gentlemen,
It is on the premise of economic development, can any country get rid of poverty and conflict, and truly achieve political independence.

In the relationship and cooperation with Africa, we uphold the principle of sincerity, real results, amity and good faith.

We take the right approach to justice and interests, put the justice as a priority. Chinese President Xi Jinping has successively put forward with the “Ten cooperation plans” and “Eight Major Initiatives”.

These initiatives will help crack the “three major development bottlenecks” in Africa, namely underdevelopment in infrastructure, capacity building and financing. This will accelerate Africa’s industrialization and agricultural modernization as well as bring in win-win cooperation and common development.

We are glad to see that Africa has been rising as a whole driven by the FOCAC and the Belt and Road Initiative. China-Africa relations have entered a new era of win-win cooperation for common development.

In Africa’s pursuit of lasting peace, independent and sustainable development, China has been and will continue to be the most sincere friend and reliable development partner.

Hon. Speaker, Hon. Ministers, ladies and gentlemen,
As the Chinese Ambassador to The Gambia, I am happy to reflect that this year also marks the 3rd anniversary of the resumption of China-Gambia diplomatic relations.

In the era of New Gambia and within the framework of FOCAC and South-South cooperation, China-Gambia cooperation has yielded a lot in a very short period of time. Our bilateral ties are now at a new phase of comprehensive and rapid development.

The momentum of high-level exchanges is strong while mutual understanding and political trust being deepened.

During which, the two leaders expressed their satisfaction with the achievements made in the development of our bilateral relations.

In January 2019, Chinese State Councilor and Foreign Minister Wang Yi paid a successful and historic official visit to The Gambia.

The visit brought new impetus to our bilateral relations.

Practical cooperation between China and The Gambia has born remarkable fruit.

The International Conference Center project is almost completed and ready for hand-over; the road and bridges project in URR is well under construction; the third batch of China Medical Team and first batch of agricultural experts have arrived in Banjul this year.

They are providing quality medical services and agricultural technical assistance to The Gambia.

In June, China and The Gambia also signed an economic and technical cooperation agreement. According to the agreement, China is going to help The Gambia improve infrastructure in a comprehensive and sustainable way.

People-to-people exchanges in many areas such as education, media, culture, youth and women are also strong and active. There are already hundreds of Gambian students studying in Chinese universities.

The majors chosen by the awardees cover a wide range of subjects will match the implementation of The Gambia’s National Development Plan (2018-2021).

On issues involving the core interests and major concerns of China and The Gambia, our two countries are ready to render each other mutual understanding and support.

The Gambian government firmly adheres to the one-China policy.

Just yesterday, I saw on the internet that Her Excellency Isatou Touray, the Vice President of the Republic of The Gambia, stated in her address at the General Debate of the 74th UN General Assembly that The Gambian Government recognized only one China and believed that the evolution of its relationship with the People’s Republic of China was built on shared prosperity and a win-win approach.

We appreciate that. The one-China principle is the very political foundation of our bilateral ties and that of China’s diplomatic relations with any country in the world.

Hon. Speaker, Hon. Ministers, ladies and gentlemen,
Ever since my arrival last November, I have been witnessing tremendous efforts and achievements made by the Gambian government and people in coping with development challenges and building New Gambia.

China would strengthen experience sharing and practical cooperation in poverty reduction for development. China would also work together with The Gambia in making full use of The Gambia’s human and natural resources for sustainable development.

China-Gambia relations focus on and benefit the peoples. Our brotherly ties will go from strength to strength.

I believe that China-Gambia relationship will develop into a new state-to-state relationship.

This relationship shall feature mutual respect, fairness and justice, and win-win cooperation, and contribute to building a community of shared future for mankind.

On this auspicious occasion of National Day Celebrations, I would also like to take the opportunity to extend to all my compatriots here in The Gambia my warmest greetings and best wishes.