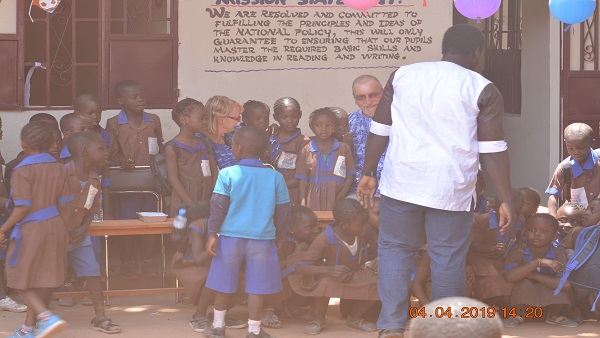 A new classroom block was on Thursday handed over to the management of River Side Nursery School in Tallinding.
The building is sponsored by Mrs Sylvia Inglis and David Mayes from UK, in collaboration with CK Holdings Company Ltd, at the cost of £6,000.
In his inaugural speech, Momodou Manjang, the headmaster of River Side Nursery School expressed delight over the building.

According to him, the school was established by one Mustapha Jammeh with one classroom block and in 2016 Sylvia and David with their friend Sheriffo Camara built a the new classroom block.

Mr Manjang thanked the sponsors for increasing the capacity of the school to enrol more pupils since more are on the waiting list, turned away for lack of space. “With this new building, we can call their parents to bring them to school”, he said with great delight.
Camara, a tourism sector operator who facilitated the contact said the classroom block was built with a store and some furniture provided.

Sylvia, one of the donors, urged the pupils to take their education seriously and make good use of the learning facilities.
Recently, the same donors inaugurated a 5000 litre borehole in the village of Jomar, Kiang East District.