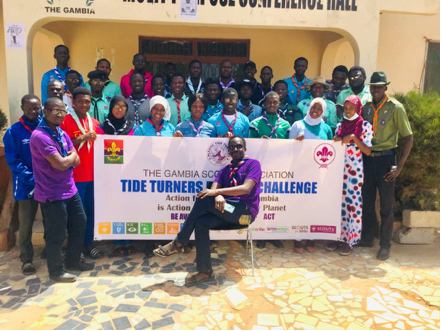 The Gambia Scout Association has unveiled a plastic tide challenge in an effort to reduce the impact of plastic pollution in the country.

The plastic tide challenge is aimed at mobilising thousands of young people around the world to participate in the fight against plastic pollution and marine litter.

The challenge has been developed with a series of activities which include helping young people to become aware of the issues threatening the planet, as well as to engage them “in a fun and challenging undertaking which can lead to a sense of personal fulfillment in taking responsibility for the planet’s well-being”.

The challenge also encourages the development of leadership skills, meaningful and impactful change-making with the aim of creating “a new movement of youth across the globe who will be committing to take action to reduce plastic waste in their lives, at schools, and within the community”.

Countries and cities around the world are banning plastic. Since the 1950s, around 8.3 billion tons of plastic have been produced worldwide. In some parts of the world, using plastic is already illegal.

According to reports 73% of beach litter worldwide is plastic and a million plastic bottles are bought around the world every minute.

About 2 million plastic bags are used every minute, killing more than 1.1 million seabirds and animals every year. The reports indicate that the average person eats 70,000 microplastics each year.

To effectively implement the project, the Gambia Scout Association has trained about 40 Gambian youths drawn from scout associations across the country who will serve as coordinators for the challenge.

The national youth program commissioner, Gambia Scout Association, Adama Beyai, said the training will equip the young people on how they can take part in eradicating plastic pollution in the country.

“We believe the country cannot achieve its objective of having a society free from plastic pollution, if its young people are not equipped with the necessary skills. That is why today with support from the world bureau in partnership with UN environment, we are gathered here,” he said.

He said the free plastic Gambia initiative was launched in 2012 to encourage youths around the world to mobilise efforts to reduce the presence of plastic.

“To achieve a sustainable fight against plastic in the world, the young people should be in the center. This is why this training is very important and could not have come at a better time,” he added.

The program officer, National Environment Agency, Buba Sey, said the dangers associated with plastic have necessitated the need for government to immediately come up with “a strategic plan to minimise the use of plastic bags in the country”.

The assistant youth program at World Organization of the Scout Movement (WOSM), Grace Kamau, challenged the young scouts “to find means on how to solve the problem surrounding the issues of plastic bags”.

“I am mostly looking forward to the solution you provide to the government on how they should fight against the issues of plastic,” she urged.

“The change you want to see in this world should start with you. If you conclude that we should stop buying juice and other foods in plastic bags; take that decision, that from henceforth you will not buy it again. Believe me, you will be amazed with the impact it will make,” he said.

Jarju assured the scouts of NYC, Ministry of Youth and government’s continued support and collaboration.