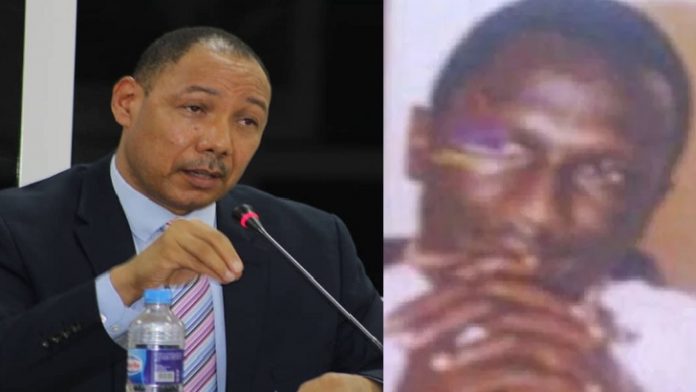 The thrilling testimony of former AFPRC junta member Edward Singhatey ended yesterday in an anti-climax, with his denial that he never killed former finance minister Koro Ceesay.
This last chapter formed the peak of a marathon appearance that took three days and gripped the nation to fever pitch. But in the end, Edward kept the 25-year waiting back to suspense, denying mounting evidence adduced from multiple witnesses, some of them his close protection staff.

Those witnesses had told the TRRC that Singhatey and Yankuba Touray lured Ceesay into Touray’s house where, along with others, killed him and took his body to a bush near Jambur where it was burnt on 23 June 1995.

“I never went to Yankuba’s house that day and those who said they saw me there could only have been mistaking. Not that day, sir”, he told the TRRC lead counsel Essa Faal.
Singhatey then went on to paint a story suggesting that shortly before his death, Koro had been asked by Jammeh to carry some money from Libya to the Cassamance rebels. He said money and ammunition were occasionally given to Cassamance rebels who would come with a gelege to a bush near Jambanjelly for collection.

He recalled attending a meeting with Samba Bah, the late former NIA director, former President Jammeh and the late Koro Ceesay where Jammeh noted his disgust at the frequent closing of the border by Senegal.

”Koro Ceesay had advised Jammeh for us to withdraw the Trans-Gambia ferries to hurt the Senegalese merchandise trucks that crossed the water way to the southern part of Senegal and this was done on the pretext of maintenance of the ferries.”

A that meeting, he went on, Jammeh announced that some money has come from Libya and because this was a huge amount, some hundreds of thousands of dollars, it was given to Koro for delivery.

When told that witnesses had alleged that he was jealous of Koro and had threatened to kill him, Singhatey denied that, saying his relation with Koro was cordial since discovering that he was the son of his former head master Sainey Ceesay, who took care of him and his siblings at Bakau School.

He also denied the testimony of Alagie Kanyi, who claimed he took part in the murder of Koro alongside Edward and others on that fateful night.
Again Edward requested to put matters into context. He explained: “Alagie Kanyi was someone accused of involvement in the November 11 coup and he turned against his own people on his own accord. It would have been naïve and inconceivable on the path of anyone to use that kind of man for a heinous crime like the one being alleged,” he told the TRRC.

Tempers flared between the former Junta member and lead Counsel Essa Faal after the latter informed him that he was always denying personal responsibility for crimes and incidents that could nearly total 50.

At this stage the TRRC chairman intervened to create a buffer.
Mr Singhatey had earlier apologized to the many dozens of former government officials who were arrested and tortured at Fajara barracks, including MC Cham who he admitted was very helpful to his family. ”All these things should not have happened and I apologise for them,” he said.

Sana Sabally
Mr Singhatey also completed his story of how his former colleague and fellow architect of the 1994 coup Sana Sabally was arrested. He said he took part in his arrest but never accompanied him to Mile II Prisons. Though he described as a lie Yahya Jammeh’s dramatised account of the incident, Singhatey said Sabally’s weapon was unusually ready for firing which made him suspect that he may not be up to any good given his violent manner.

He however admitted there was not much tangible substance in Jammeh’s allegation that Sabally was about to stage a palace coup.
“I will however apologise to Sabally because until that point we have had a good relation in the army and we started the entire process of the coup together,” he said.

Singhatey apologised for anything that has gone wrong under his charge or those working under him. His testimony which recorded the highest audience globally split opinions.
While others genuinely expressed solidarity with him, many commentators did not simply believe him.