The Cubanness of our heroic health guerrillas in The Gambia 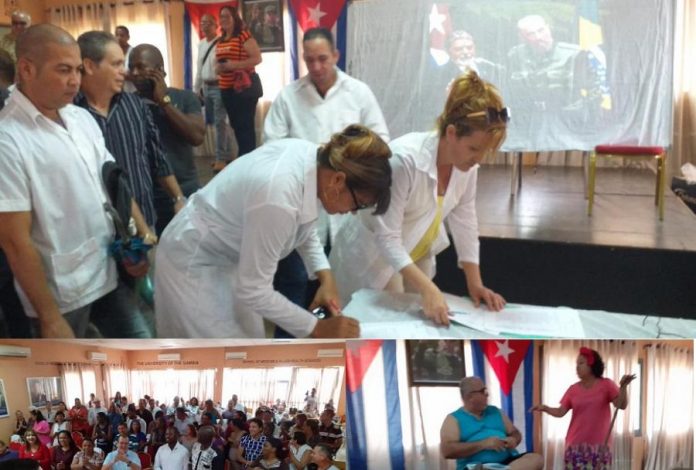 Banjul, Oct. 19.- The members of the Medical Brigade of Cuba (BMC) in the Gambia are not only Heroic Health Guerrillas, more than doctors and more than supportive, but they also carry with them that love and roots for their corners, land that characterizes the inhabitants of the greater of the Antilles.

They demonstrated it once again in an impressive and beautiful activity that they organized this Saturday on the theater of the central hospital of Banjul, on the occasion of October 20, Cuban National Culture Day, in tribute to our Prima Ballerina Assoluta Alicia Alonso, in remembrance to our heroes Ernesto Che Guevara and Camilo Cienfuegos, and for the release of former Brazilian president Lula Da Silva.

Beautiful songs by Polo Montañez, and El Necio, by Silvio Rodriguez, were performed by the collaborators, who also declared and staged a monologue of the unforgettable Luis Carbonell, an expression of Cuban roots and customs.

The senses and respectful tributes to the recently deceased Alicia Alonso, and the unforgettable commanders Che and Camilo, were not lacking, but the humor that characterizes the people of the Caribbean nation, and their passion for dancing when they hear songs from their Island were also present.

Solidarity, that legacy that the historical leader Fidel Castro left us forever, closed the activity with the signing for the release in Lula Da Silva of all members of the BMC, as well as by Gambian friends as the president of the Friendship Association with Cuba, Modou Grant Peh.

The Banjul hospital theater rumbled with tributes and joy, and became a little piece of Cuban land in this small and distant country of West Africa, always grateful for the help provided by the Heroic Health Guerrillas of the largest of the West Indies
The BMC Chief, Anaris Martha Odio, and the Cuban Ambassador to the Gambia, Rubén G. Abelenda, were present at the activity.