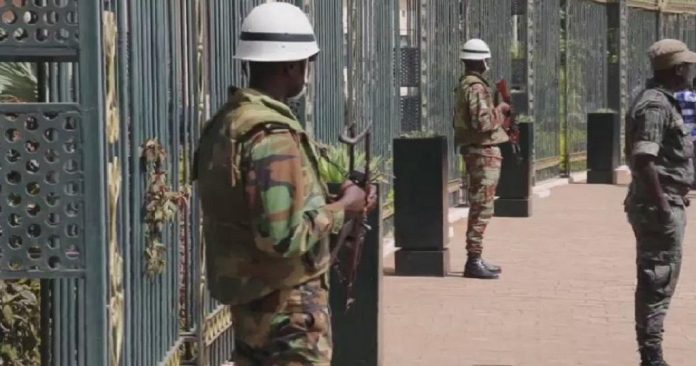 A dozen soldiers have occupied the grounds of Guinea-Bissau’s Supreme Court, the court said on yesterday, deepening a post-election crisis that has resulted in the appointment of rival presidents and the silencing of state media.

The country’s military, which has regularly intervened in politics in recent decades, vowed to remain neutral ahead of the December election. But the presence last week of senior army officials at the contentious inauguration of Umaro Cissoko Embalo as president appeared to signal it had picked a side.

The electoral commission has repeatedly confirmed Embalo as the winner of the December 29 run-off despite complaints by the Supreme Court and the declared runner-up that the commission had not respected the court’s orders to conduct a full audit of the vote.
On Monday, soldiers occupied the Supreme Court’s grounds of in Bissau, the capital, blocking entry to judges and officials, court spokesman Salimo Vieira told Reuters.
“The soldiers are still refusing entry to the Supreme Court, which cannot function,” he said, adding that other courts had also been occupied by the military.

State radio has been silent and the state television channel has shown only a blank screen since February 29. Streets in Bissau have remained quiet.
An Embalo representative, Bamba Cote, said Embalo had asked the army chief of staff for troops to occupy “public institutions as well as radio and TV stations in order to enable the formation of the new cabinet and its installation in the state institutions.”

The soldiers were supposed return to their barracks today, Cote told Reuters.
Domingos Simoes Pereira, candidate of the majority party in parliament and shown by the official results as losing the run-off to Embalo, has denounced his rival’s inauguration as a coup.

In the ongoing standoff, Pereira’s allies in parliament had appointed the speaker as a rival interim president after Embalo’s inauguration. The speaker, Cipriano Cassama, withdrew his claim to the presidency on Sunday, citing the risk of civil war.

Guinea-Bissau has witnessed nine coups or attempted coups since independence from Portugal in 1974, most recently in 2012 when an election was abandoned after soldiers stormed the presidential palace.

In a statement on Sunday, West African regional bloc Ecowas said Embalo’s inauguration had taken place “outside legal and constitutional frameworks” and warned about “the interference of the defense and security forces in the political sphere”.

The December election was meant to end five years of institutional chaos in which then-president Jose Mario Vaz cycled through seven different prime ministers during a series of political disputes.